The FA have just announced that Liverpool midfielder Suso has been fined to the tune of £10,000 for ‘referencing a person’s sexual orientation and/or disability‘ on Twitter – more specifically calling teammate and compatriot Jose Enrique ‘gay’ and joking that had ‘mental problems’ after posting the following photo… 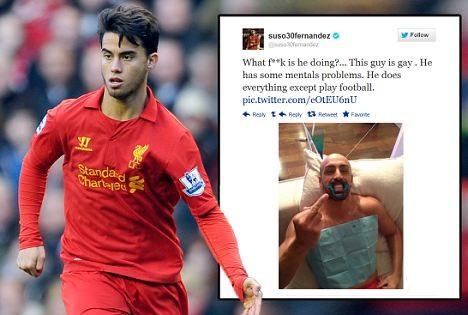 Yes, it would appear over-sensitive on the FA’s part, especially seeing as it was obviously little more than flippant, throw-away BAAAAAAAANNNNNNTTTTZZZZZ!!!!, but for good or bad Suso is a professional footballer and therefore now duty-bound to use social media in the most anodyne manner possible for risk of ‘not setting a good example’ to the kiddywinks – of this fact, he was well aware.

It’s over the top, but at least the FA are attempting to apply a blanket punishment for all ill-judged social media bollock-drops. At least they’re trying to do something.

Being 10k lighter than he was this morning, Suso will definitely think twice about his Tweets from now on.