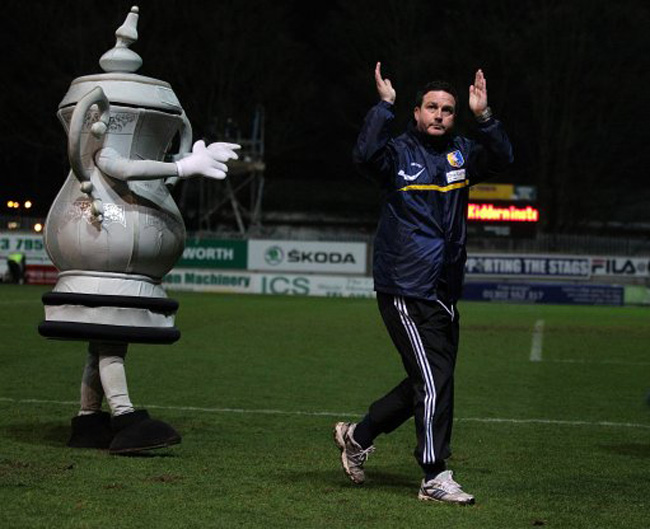 The moment FA Cup mascot buddy attempted to shoot Mansfield boss Paul Cox. (Bet it was Suarez in the costume).

The pompous and the self-inflated of the footballing media world will be sharpening their (metaphorical) pencils today after their favourite baddie, Luis Suarez, blatantly handled the ball on the way to Scoring Liverpool’s winner against non-league Mansfield Town.

Prior to that palavar, the Reds had dominate the first-half at Field Mill, with new-boy Daniel Sturridge celebrating his debut for Liverpool with a well-taken goal on mins. However, after the break, the home side finally started to trouble the Reds, with front-man Matt Green a fleet-footed thorn in the visitors’ side.

With the home side pressing for an equaliser, Brendan Rodgers sent on star man Suarez early on in the second period and after just five minutes, the striker put his side 2-0 up, although the goal was full of controversy. After being put through on goal by Stewart Downing, the Uruguayan blatantly handled the ball before firing home. Although to be fair to the striker, he looked as though even he was expecting a referee’s whistle. But it never came.

Still, the home side still pressed and striker Green eventually levelled the scores for Mansfield, firing home from close-range to set up an exciting last 10 minutes. However, ultimately it was the Premier League big-boys who would secure passage into the fourth round of the cup.

Stags’ manager Paul Cox deserves much credit for his side’s performance, particularly in the second-half. Indeed, as well as the Suarez handball goal, at the other end of the pitch, Mansfield arguably could’ve had a penalty when the ball hit Joe Allen’s arm on the line.