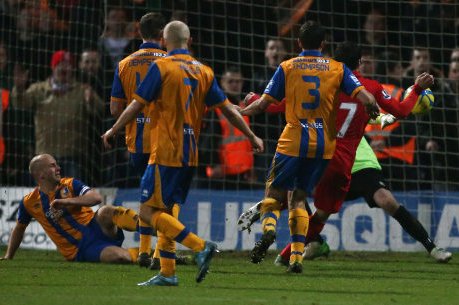 ESPN have moved to issue an official apology (as posted directly in the comments of this Pies’ article) after commentator Jon Champion referred to Luis Suarez’s hand-assisted winning goal against Mansfield in the FA Cup this weekend as being “the work of a cheat.”

The comment in full (the last paragraph of which has been issued as a formal statement):

Dear Who Ate All The Pies,

Tristan O’Carroll here from ESPN’s press office. I wanted to share with you a statement (attributed to an ESPN spokesman and not to me) around our lead commentator Jon Champion’s comments yesterday in case you have or will be running something about it. Would appreciate if you would fold into any posts.

“We take our responsibility to deliver the highest standards of coverage to our viewers. ESPN’s editorial policy is for commentators to be unbiased and honest, to call things as they see them. Inevitably this can involve treading a fine line on occasion, especially in the heat of the moment. Comments during the Mansfield v Liverpool match caused offence where none was intended and we have spoken to our commentator about this incident.”

Thank for your time.

Now, the wording of Champion’s comment may have been a little rich for some tastes, but was he not there to provide his opinion? We constantly decry commentators for not calling it as they see it, and now it’s perfectly apparent why fence-sitting is so commonplace – the omnipresent fear of being censured.

Many are citing bias and a lack of impartiality as being the problem, as it’s not the commentators’ place to be pontificating but how impartial is it proper to be in such circumstances? Doesn’t Champion have a journalistic duty to say things as he sees them, or is the first rule of his trade now “don’t say anything that folk may overly disagree with”?

Football and all coverage thereof will fast becoming utterly sterile – even more so than it currently is – if the indignation of the few is given such sway.

Despite your gut reaction, Champion wasn’t questioning Suarez’s conduct because he’s a Liverpool player, he was questioning his conduct because he effectively stuck the winner in with his hand and then celebrated by kissing said appendage in front of the Mansfield fans. Whisper it, but he did kind of cheat a little bit, no?

Champion did nothing wrong as far as we’re concerned – he’s perfectly entitled to call the shots as he sees fit – but ESPN appear to have allowed the inevitable frothing outrage to sculpt their reaction. Football is a circus and the clowns are the ones cracking the whip.

What sayeth thou Pies fans?