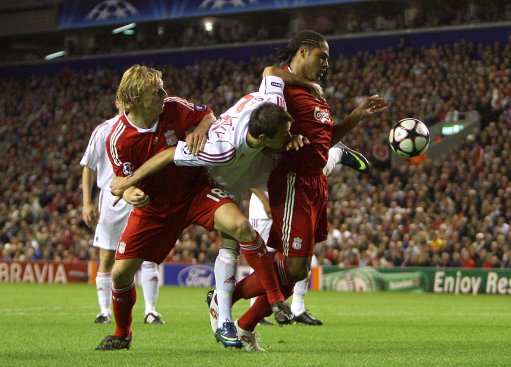 After Europol kindly gave us some clues yesterday, Danish newspaper Ekstra Bladet reckon they’ve nailed which Champions League fixture, played in England within the last four years, it was that was fixed by the nasty men from Asia.

(We must admit that out first thought was the Liverpool 8-0 Besiktas debacle, but it turns out that the Turkish side were actually just that bad!)

Having woken up in the middle of the night with a raging clue, Ekstra Bladet are reporting this morning that the game in question was Liverpool’s 1-0 win over Debrecen at Anfield in 2009 and that the game was fiddled by the Hungarian team’s goalkeeper. Liverpool themselves are not under suspicion.

German police have already established that a Croatian match-fixing ring attempted to diddle another of Debrecen’s matches during the very same Champions League campaign – the 4-3 defeat against Fiorentina.

The Debrecen goalkeeper, Vukasin Poleksic, was banned from football for two years by UEFA after being found guilty of failing to report the approach from match-fixers before the Fiorentina match, with the Court of Arbitration for Sport upholding the ban after Poleksic appealed.

Apparently the match-fixers wanted “at least three goals” in the Liverpool-Debrecen game and text each other to express their disappointment when Poleksic only managed to let in one, parrying a Fernando Torres shot straight to the feet of Dirk Kuyt, who duly scored the only goal of the night.

Sadly, we feel there is much more to follow…