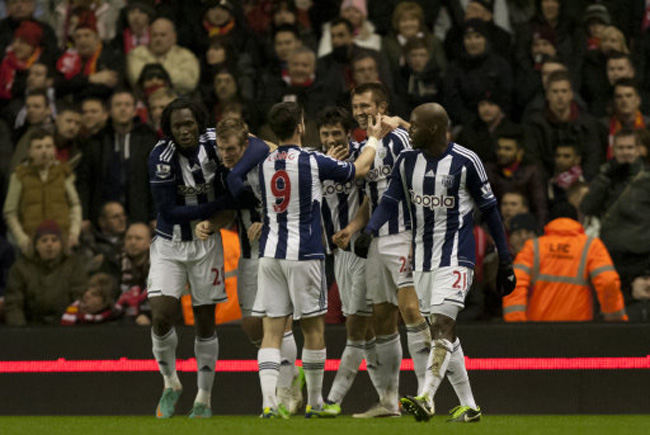 The Rodgers’ Revolution at Anfield took a hefty blow on Monday night as visitors West Brom secured a 2-0 win on Merseyside.

Baggies’ boss Steve Clarke may have left out naughty boy Peter Odemwingie, but the game at Anfield saw midfield duo Youssouf Mulumbu and Claudio Yacob both start for the first time since the start of the December (due to injury and ACON duties).

The home side dominated for much of this clash but without the injured Daniel Sturridge, they lacked a cutting edge.

The Reds did have a gilt-edged chance to go ahead on 76 minutes, when Jonas Olsson was adjudged to have fouled Luis Suarez in the box. However, the superb Ben Foster kept out Steven Gerrard’s effort, with the Liverpool captain’s miss to prove costly.

Indeed, just four minutes later, defender Gareth McAuley rose to head home from a Chris Brunt corner to give the visitors the lead against the run of play. And then, after Liverpool had pushed for an equaliser, Romelu Lukaku made it 2-0 for the Baggies.

While the team in ninth place in the table beating the team in eighth is hardly a massive shock, the defeat does highlight the large amount of work Rodgers still has to do at Anfield.

West Brom boss Clarke, on the other hand, will be delighted to get three points on the board and leap-frog the Reds into eighth in the table.