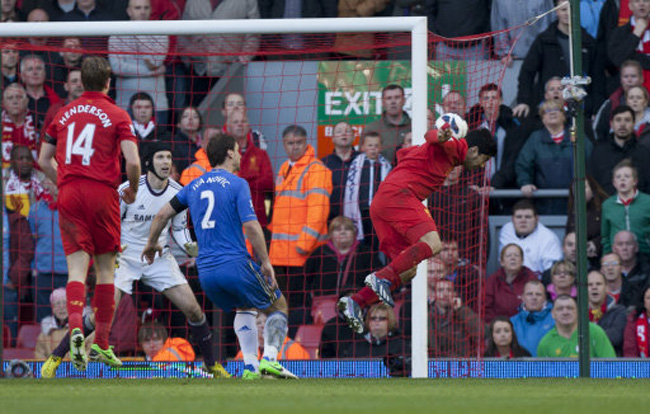 No doubt by now you’ll be well au fait with Mr. Suarez’s bizarre behaviour at Anfield on Sunday. But as well as biting the arm of poor old Branislav Ivanovic, the Uruguayan loon was also involved in a number of key incidents in this big clash on Merseyside.

Brazilian Oscar had headed the Blues ahead on 26 minutes but ex-Chelsea striker Daniel Sturridge levelled the scores after the break to set up an enthralling finish.

Not long after the Reds’ goal, Suarez handled a Chelsea corner, with Eden Hazard firing home the resultant spot-kick. Soon after, Suarez indulged in a bit of arm-biting in the Chelsea box before finally, in the 97th minute of the game, heading home a goal which could have a massive negative influence on Chelsea’s Champions League hopes.

The draw sees Liverpool stay seventh, Chelsea go a point behind third-place Arsenal (albeit with a game in hand) and Suarez reclaim his place as football’s pantomime villain in chief.