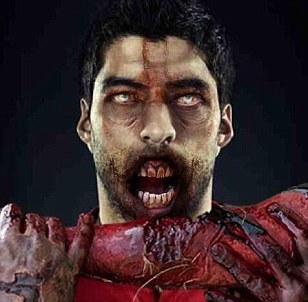 Sensing a nailed-on publicity opportunity, a couple have invited bitey bitey Liverpool striker Luis Suarez to their zombie-themed wedding after chowing down on Branislav Ivanovic’s fleshy bits on Sunday,

Jennifer Jones and Rob Blackmore are to be married as members of the undead on Wednesday with the wedding being paid for as a PR stunt by Deep Silver, the company behind new video game Dead Island: Riptide, and the Liverpudlian couple have extended an invite to their favourite cannibalistic Uruguayan.

“We understand those who have an appetite for human flesh like the zombie hordes found in Dead Island: Riptide.

“With that in mind, we’d be delighted to have Suarez attend our zombie wedding… just as long as he’s aware that the bride and groom might bite back!”

We’re going to go out on a (partially ingested) limb here and say that Suarez probably won’t be in attendance, for no other reason than he seems to prefer his human meat to be fresh.