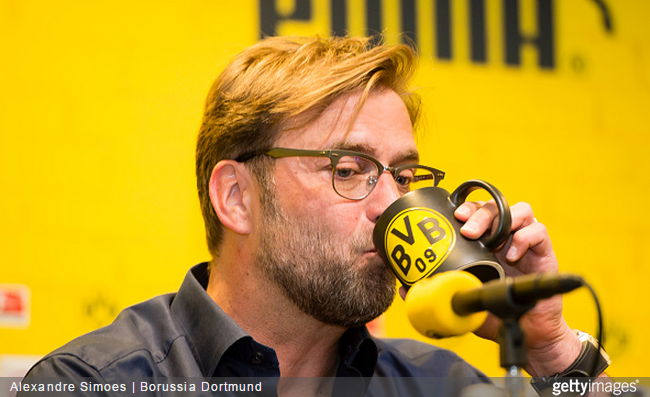 Jurgen Klopp is heading out of Borussia Dortmund. But where to next for the affable German?

The Daily Express says Manchester City is Klopp’s most likely destination. Why City, who have moved towards the Spanish model in recent seasons with the appointment of former Barcelona executives Ferran Soriano and Txiki Begiristain (secured in the hope of luring Pep Guardiola to the Etihad), would opt for the man who made Dortmund masters of high-octane gegenpressing is not explained.

Any move for Klopp would necessitate a wholesale change in style and massive investment. Would Financial Fair Play allow it?

The Mirror says City’s main rivals for the German are Napoli. Can anyone really see an Italian team embracing Klopp’s madly energetic, hard-pressing style? Klopp has said that he loves “serenity football… What we call in German – English football: rainy days, heavy pitch, everybody is dirty in the face…” So. Sunny Napoli it is then.

The Sun leads with news that Klopp has “told Premier League clubs: Come and get me.” The paper suggests the clubs that could go for Klopp: Liverpool, Manchester City, Arsenal, Tottenham, West Ham  and Newcastle.

The Mail produces its list of possible Klopp destinations. City, Liverpool and Arsenal are the only Premier League clubs to feature. No word on West Ham, who would offer Klopp an intriguing challenge. Liverpool would be Klopp’s natural fit, but Brendan Rodgers is doing a decent job at Anfield. Arsenal could do with Klopp when Arsene Wenger leaves in a year or two. But after years of relative austerity when they sold their best players to balance the books and fund a new stadium, Wenger’s sudden departure would be like a man walking away from a loaded fruit machine.

The Mail says the clubs most likely to go for Klopp are Bayern Munich and Real Madrid.

Could Klopp, the outsider, end up at one of the ultimate insider clubs? Rory Smith (Times) compares such a move to “the gertrification of Williamsburg, the adoption of the beard by the Ben Sherman boys, the ultimate defeat for hipsters”.

But while a move to Real Madrid seems possible, Klopp to Bayern would surely be a bitter blow to the Dortmund fans who love him. The Mail says “sources in Germany have not ruled out a move to rivals Bayern Munich if Pep Guardiola fails to win the Champions’ League this season”.

That might be because Klopp has not ruled out a move to anywhere.