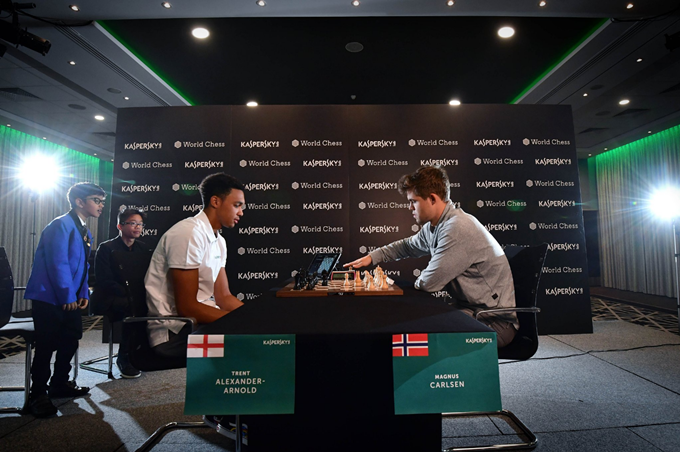 Trent Alexander-Arnold is a bit of a chess buff and, honestly, Pies are as surprised to hear that as you are.

Anyway, after hearing that the Liverpool right-back has beaten all comers to be crowned the ‘Melwood Grandmaster’ at club level, he was invited along to take on a true champion in Manchester on Monday – the day after his 20th birthday.

In a match organised by Kaspersky Lab, Alexander-Arnold was pitted against Magnus Carlsen, the reigning World Chess Champion who has dominated the chess world for eight years.

The heavy favourite going into the game, Carlsen managed to see off his rookie opponent in just 17 moves, taking five minutes to clinch the win.

However, that does mean that Alexander-Arnold put up a more resilient showing than Bill Gates, who lost to the 27-year-old Norwegian in just nine moves when the pair played on a television talk show in 2014.

And it’s all over after just 17 moves! But at least @trentaa98 lasted longer against @MagnusCarlsen than @BillGates @kaspersky #TAAvMagnus pic.twitter.com/U82G3H9NhG

Speaking after the game, Alexander-Arnold remained gracious in defeat:

Although it may go down as a 1-0 loss, I will be practising more and maybe there will be a rematch.

This whole experience has been an eye-opener, not only into just how much goes into becoming great at the game but also seeing the similarities between it and the sport I love, football.

Football and chess can seem like polar sporting opposites, but there are so many similarities with the modern game.

Soon as the diving starts creeping in, then you’ve got to start worrying.

Carlsen is currently in the process of limbering up for the World Chess Championship Match 2018 in London, where he’ll face up-and-coming challenger Fabiano Caruana next month.