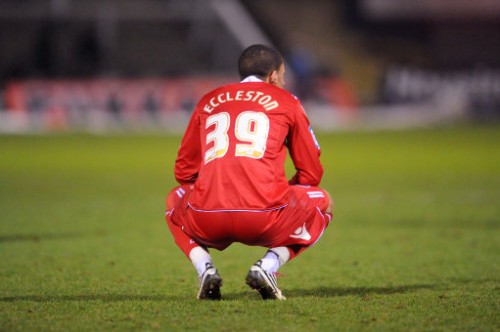 I’ve always wondered why football clubs allow their players to have public Twitter accounts. I understand the argument that it brings the fans closer to the player, but more often than not, it gives the overpaid young whippersnappers ample opportunity to put their heavily-insured feet in their mouths.

Liverpool youngster Nathan Eccleston is the latest player to score a social media own-goal, courtesy of a Tweet, posted  on the anniversary of the September 11th attack on the US, which questioned the origin of the atrocities.

“I aint going to say attack don’t let the media make u believe that was terrorist that did it. #O.T.I.S.”, he Tweeted. “O.T.I.S.” apparently stands for “Only The Illuminati Succeed”, a reference to the shady, ancient organisation covered in detail in Dan Brown’s best-selling books.

The Anfield bigwigs are rather unhappy with the young striker’s Tweet with a spokesperson saying: “The club takes this matter extremely seriously and senior club officials have informed Nathan Eccleston that we are undertaking an investigation into the circumstances surrounding these postings and will decide on an appropriate course of action.”

However, while the timing may have been tasteless, the youngster is only expressing an opinion held my many, many people. Whether you think he has a point, or is simply a loony, surely he should be allowed speak his mind without the Anfield suits getting their knickers in a twist? Either that or just stop their players from having Twitter accounts.