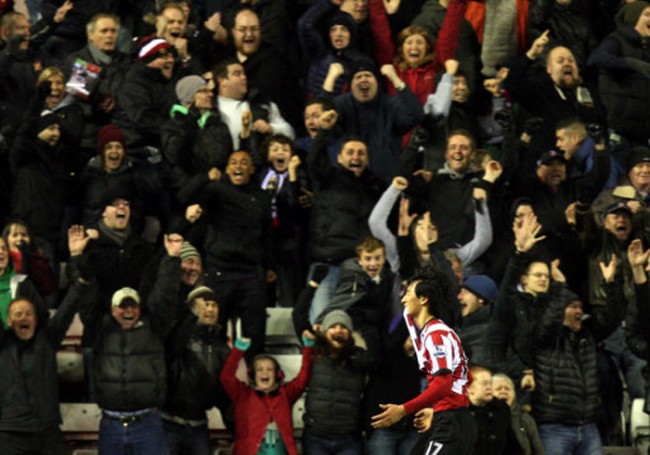 After seeing Manchester United and Chelsea both lose, and Tottenham drop two points at the Liberty Stadium, the scene was set at the Stadium of Light for Manchester City’s diamond-encrusted side to move ahead in the race for the title. However, in the end, it was the home side who would be celebrating after a rather lucky victory.

The Citizens dominated the vast majority of the game, with Micah Richards hitting the crossbar and Edin Dzeko missing a number of very scoreable opportunities. Sunderland, however, worked hard to close down City all afternoon and conjured up a few decent chances themselves.

Starting with David Silva, Sergio Aguero and Mario Balotelli on the bench, Roberto Mancini brought on the Argentinian at half-time in order to inject a bit more invention into the City side, while Silva (for Nasri) followed soon after. However, despite pushing for the winner, the visitors somehow failed to find the back of the net.

With only seconds remaining, Sunderland, roared on the home support, broke forward with Stephane Sessegnon threading a ball through to young substitute Ji Dong Won, who calmy rounded Joe Hart before slotting home. The Korean was a mile offside, but the goal stood and City were forced to rue a major missed opportunity. Sunderland, on the other hand, continue to blossom under Martin O’Neill.