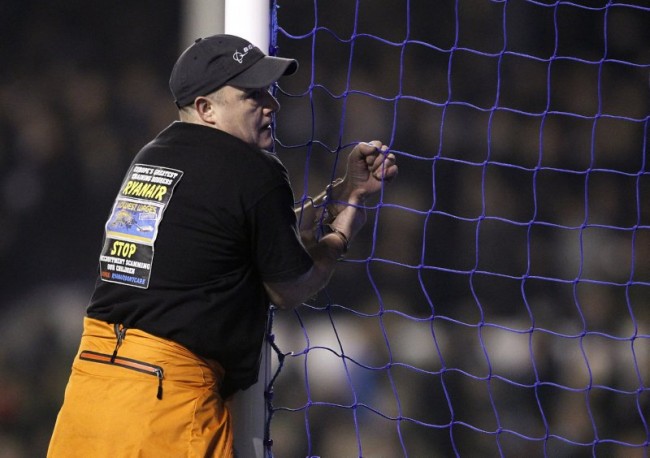 You may have noticed that Everton’s win over Man City at Goodison had to be halted last night for five or so minutes when a fan made his way onto the pitch and handcuffed himself to the frame of Joe Hart’s goal, before having the cuffs taken off with boltcutters, being forcibly removed by the police and ejected from the ground entirely.

The 46-year-old man was subsequently charged with ‘going on to the grassy bit at a football match’ and bailed with conditions to appear before Liverpool Magistrates Court on February 17th.

It has since come to light that the chap’s name is John Foley, and he was protesting against budget airline Ryanair; their wage structure (hence the “Europe’s Greatest Training Robbers – RYANAIR – Lowest Wages” t-shirt) and their recruitment policy; specifically the fact that they won’t give his daughter a job – though what that has to do with Everton’s woodwork is anybody’s guess.

Clear? Nope, us neither. Good luck John, whatever it is you’re blathering on about.