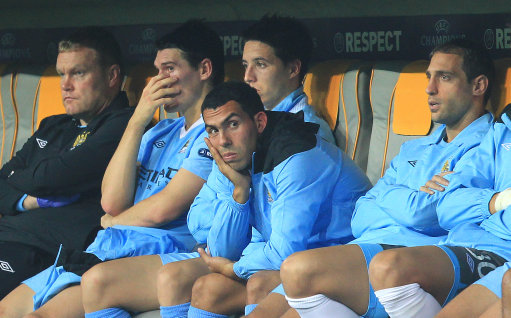 Next to Luis Suarez and his recent actions, fellow South American firebrand Carlos Tevez suddenly looks like a misunderstood little pussy cat (ish). However, having been left out in the cold by Roberto Mancini and after seeing potential moves to Serie A and Ligue 1 fall through, the pitbull striker has now returned to Manchester with his passion for the game apparently restored.

The former United striker has not played for City since September after he apparently refused to come on as a sub against Bayern Munich.  However, in an interview with Fox Sports in Argentina, he is now apparently raring to go. He said:

“I can imagine myself going on to the field and I’m going to have to be brilliant (to win over the critics) It’s not going to be easy for me nor the fans.”

“If I was wrong, I say sorry. I sincerely believe I did not make a mistake. If it’s true (Mancini would welcome me back), of course I like that, if it’s for the media, no.”

However, in recounting the situation on that fateful night back in September, Tevez also said:

“I was kind of in a bad mood and when he brings on (Nigel) de Jong and takes off (Edin) Dzeko, and we’re losing 2-0, I thought it was a defensive substitution so I decided to sit back on the bench. At the same time Dzeko comes off and is really angry and has a go at Mancini. He then sees the tunnel is closed so he has to sit down next to him and they start to have an argument.”

“Dzeko was speaking Bosnian and Mancini would swear at him in Italian so it was a real mess. So I go and sit down and he doesn’t see me because he’s having this discussion. But then he turns around and sees me and you can imagine what happens.”He’s in the middle of an argument so then he tells me to keep on warming up and treats me like a dog.

“So when he spoke to me in that tone of voice, and I said ‘No, I’m not going out’. So I was willing to play, but the coach was in such a foul mood because he had that argument with Dzeko. He started on me as well, started swearing at me, that was him, because I was very calm. Mancini said some horrible things to me.”

That explanation is hardly going to get the Argentinian back into his manager’s good-books, and it begs the question, will Tevez actually play any part in City’s title run-in?

Remember, Mancini did say that the South American would never play for the club again, but if the coach has had a change of heart and he does pick Tevez once again, could he actually prove to be an ace up Mancini’s sleeve as the Citizens look to win their first top tier title since 1968?