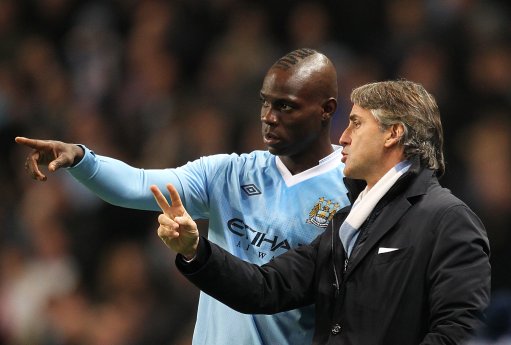 Man City manager Roberto Mancini has followed through on his promise to bring about the heaviest fine possible for Mario Balotelli after the striker was papped slinking out of a Liverpool strip club in the wee small hours of Friday morning (2:45am to be exact) by relieving him of two weeks’ wages – £250,000. One quarter of a million pounds.

Balotelli’s latest misdemeanour comes on the back of precisely several hundred others, with Mancini suggesting the soothing qualities of a good dose of holy matrimony as a measure to curb the 21-year old’s dickish tendencies:

“It could be that marriage would help him. That could be the answer, because I am sure he understands that he has made a mistake.  Mario is like this, but there is nothing we can do if he does not eventually realise he cannot keep doing this.

“It seems anything can happen with him at any moment. He is his own worst enemy and it is 100% [certain] that he should have learned by now. When you are a professional, you should know you cannot stay out until after two o’clock in the morning, so close to a game.

For those who missed it, here’s BBC reporter Damian Johnson mistaking Roberto Mancini for Mario Balotelli – what with them looking pretty much identical and all…