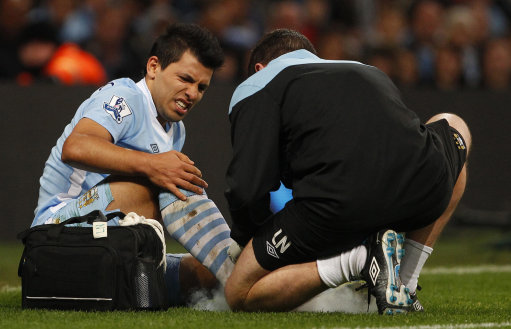 When Roberto Mancini first announced yesterday that Man City’s leading scorer Sergio Aguero would be out of action for ‘one day, ten days or two weeks’ with a ‘stupid’ injury Pies immediate thought was ‘sexual misadventure,’ which probably tells you more about us than it does about Kun.

Alas, according to the Mirror at least, Aguero has been sidelined by an altogether less salacious injury, cutting his foot on his three-year old son’s mini-moto bike and then having the gash treated with a disinfectant spray he was allergic to.

Aguero is understood to have suffered an extreme reaction after a member of the City medical staff applied the spray, with his skin inflaming so badly that it came up in ‘burn-like blisters,’ swelling his entire foot to the size of a bloomer loaf.

Yep. It’s fairly hard to argue with the ‘stupid’ assessment there.

Apropos to nothing, we’ll just leave this here…