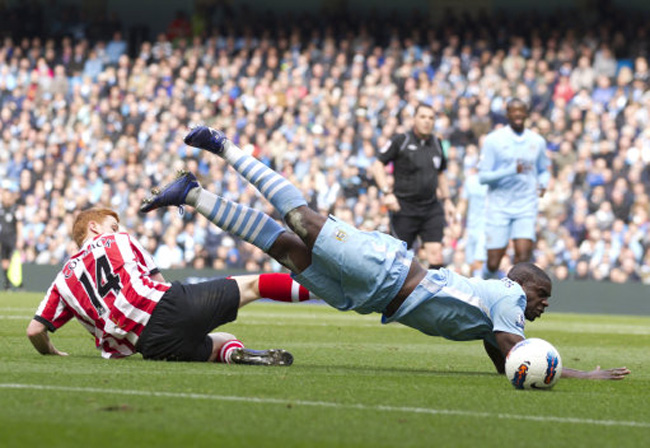 Faltering title hopefuls Manchester City had to rely on two late goals to salvage a draw at the Etihad on Saturday, against a Sunderland side who produced a superb away performance.

Seb Larsson for the ball rolling for the Black Cats on the half-hour mark, courtesy of a fine finish after good work from Stephane Sessegnon. However, City equalised soon after, after a monumental dive by Edin Dzeko earned his side a penalty (take that Patrick Vieira). Mario Balotelli slotted home the equaliser but on the stroke of half-time, Nicklas Bendtner rose to score a superb header to give the visitors a deserved lead.

City failed to improve in the second-half and it was Sunderland who scored again, with Larsson firing home after excellent play from both Sessegnon and Bendtner.

On 65 minutes Balotelli and Aleksander Kolarov had a very public disagreement over who should take a free-kick but it took until the last five minutes for the Citizens to construct a fight back, with the two players mentioned netting in the 85th and 86th minutes, respectively, to give the home side a barely deserved share of the spoils.

Roberto Mancini’s men will need to stop hemorrhaging vital points if they are to stop their United rivals from securing yet another Premier League title come May.