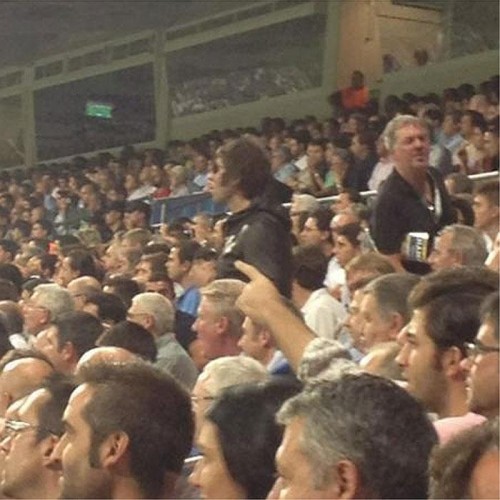 Listen up. It’s being reported in the Spanish press this morning that former Oasis frontman and current Oasis tribute band frontman Liam Gallagher was kicked out of the Bernabeu last night part-way through Manchester City’s 3-2 defeat – though not for any reasons you may be expecting.

Alas, this is not a tale of rock ‘n’ roll excess; no live animals were decapitated, no cremated loved ones were snorted, etc, etc. No, our Liam was chucked out for celebrating Edin Dzeko’s opening goal by tear-arsing down a flight of stairs and kissing a stadium security officer.

It would seem that Gallagher, little by little, became increasingly ‘vocal’ as the night progressed, culminating in a supersonic meltdown when Cristiano Ronaldo drove home the winner as City ran outta time, at which point he was forcibly removed from the stadium by Spanish police, who told him to stop crying his heart out when he refused to acquiesce, then issued instructions for him to go let it out somewhere else – preferably half the world away.

UPDATE: Here’s the video of Our Kid acting up…