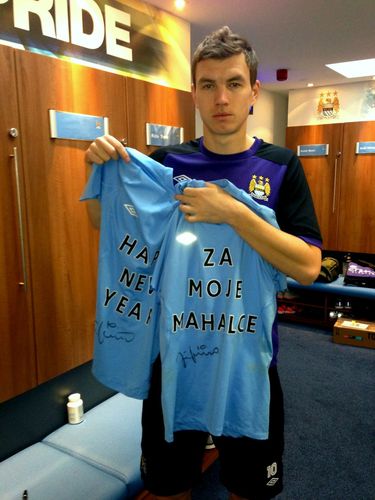 There’s just so much cockle-warming charity going on this morning!

Following swiftly on the heels of Cristiano Ronaldo slinging €100,000 in the Red Cross’s direction comes the news that Edin Dzeko is flogging the two personalised undershirts he exposed after scoring against Arsenal and Stoke earlier in the season on Ebay to help raise money for an orphanage in his hometown of Sarajevo, Bosnia.

Dzeko has listed the items himself personally, posting the following message:

Dear fans and everybody,

In order to help those in need, I decided to start selling sports memorabilia that has a special meaning for me, and all the money I raise from this and future auctions will go to charity. This time my family, friends and I decided to donate proceeds to Home for children without parental care Bjelave in my hometown Sarajevo.

Items I’m selling are two signed Manchester City Sky Blue Umbro T-shirts (size L) with custom messages: “Happy New Year” – worn on 1 January 2013 against Stoke City, and the other, in my native, Bosnian language – “Za moje mahalce” (For my mates) – worn on 13 January 2013 against Arsenal.
Both T-shirts were part of my goal celebration, so good luck bidding and don’t forget it’s for the noble cause.

Good guy Dzeko has also added his squiggle to the two shirts (which are being sold as a job lot) and we’re guessing they’ve been washed since he wore them.

The bidding is currently stood at $10,000 US dollars, so feel free to have a flutter if you trust the seller’s feedback rating and have over ten grand to blow on a couple of t-shirts.

Either way, that orphanage is getting PAID! 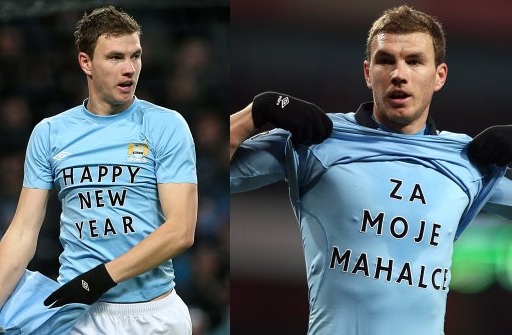 (Many thanks to Pies fan @MilesFFC for the tip-off)