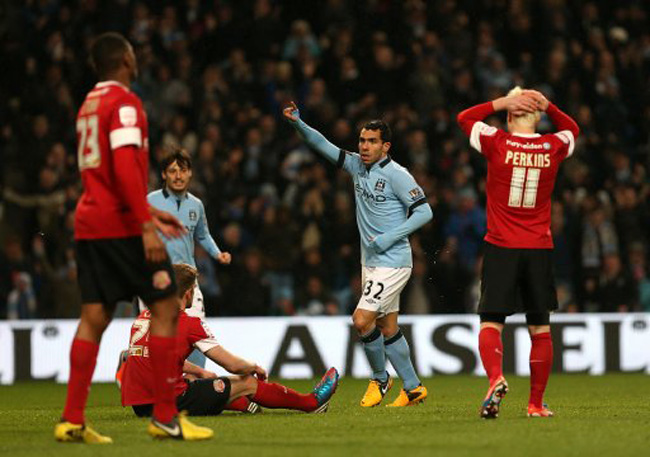 A superb individual display from Carlos Tevez helped the Citizens stroll past Championship side Barnsley and into the last four the FA Cup.

The Argentinian striker shrugged off all his current troubles with the law to net a hat-trick and set up up City’s other two goals as the Premier League side totally outclassed the visitors.

The Citizens were well up for this game, with the FA Cup arguably their only real chance for silverware left this season and were 3-0 by half-time, with Tevez netting two as well as providing a superb assist for Aleksandar Kolarov to score.

Barnsley were chasing shadows for pretty much all of the game and struggled to hold onto the ball on the few occasions they had possession.

Tevez rounded off his hat-trick on 50 minutes before David Silva made it 5-0 to the Citizens, who now go through a Wembley semi-final. Barnsley, on the other hand, can go back to fighting relegation.

Interestingly, as Tevez was subbed off late on, he and manager Roberto Mancini seemed to engage in a little heated exchange. Not sure what that was all about.