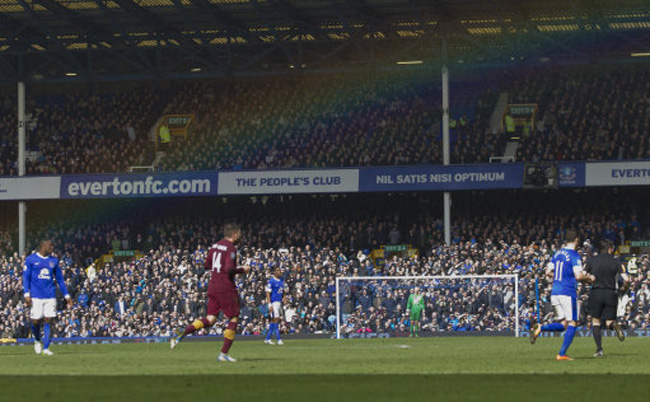 Any faint hopes Roberto Mancini had of seeing his side retain their Premier League title were all but snuffed out by an Everton side who produced a superb performance at Goodison Park.

Without Yaya Touré, the visitors missed that vital midfield thrust and it was one of the Toffee’s central players who would open the scoring. Picking up the ball from the impressive Seamus Coleman, Leon Osman fired home a magnificent curling effort with the outside of his left boot, a strike which gave Joe Hart no chance.

That goal came after Kevin Mirallas had a goal disallowed for offside when he was clearly level, as the Toffees dominated for large periods of the fist-half.

After the break, the Citizens rallied but couldn;t find a way past the superb Jan Mucha. Even the sending-off of Steven Pienaar on the hour-mark couldn’t help the Mancunian giants. Indeed, it was Everton who would score again, when Nikicia Jelavic ended his goal-drought at the death.

City will feel aggrieved after Marouane Fellaini’s handball inside the area was adjudged by ref Lee Probert to have taken place outside the box, but overall, the win for Everton was well deserved.

15 points behind Man Utd having played a game more? Surely now the title is returning to the red half of Manchester. As for Everton, they find themselves back in the race for a top-four spot.