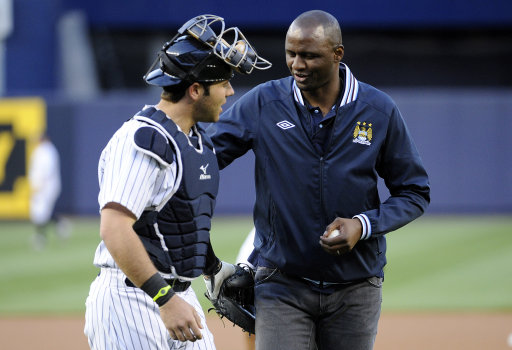 Manchester City are joining forces with the New York Yankees to create a new MLS side, New York City Football Club, which they are hoping to have competing in the MLS by 2015 as the league’s 20th franchise.

(Whatever happened to Eric Cantona’s rejigged New York Cosmos? Did they bottle it in the end?)

Anyway, City will be the majority owner of the new club, while MLB giants the Yankees will be active investors in the project as part of the NYCFC ownership group.

“We proudly welcome two of the most prestigious professional global sports organisations to Major League Soccer.

“This is a transformational development that will elevate the league to new heights in this country. The New York area is home to more than 19 million people, and we look forward to an intense crosstown rivalry between New York City Football Club and the New York Red Bulls that will captivate this great city.”

Apparently NYCFC will begin the 2015 season at a temporary home. but fully intend to become the first soccer team to build themselves a permanent home within New York’s “five boroughs” (possibly at Flushing Meadows in Queens) as NY Red Bulls currently play just  outside the line in the city’s metropolitan area.

It’s perhaps notable that the City execs pushing for the MLS franchise are exactly the same bods that tried the exact same thing with Barcelona before jumping ship, i.e, Ferran Soriano et al, who are now keen on taking inflatable bananas and openly pirated goal celebrations to a new frontier.

This is the way professional sport is going peeps. Huge worldwide brand amalgamations are the future, like it or lump it.