The Premier League season has barely been over a week and Manchester City (though we suppose you could argue that City’s season was over sometime around February) are already in New York, busy “building the brand”, “raising brand awareness” and other such disgusting corporate nonsense.

Anyway, as part of their post-season American tour, several of the City squad visited the training HQ of the New York Giants, with Joe “Hartdog” Hart and James “Milnfish” Milner indulging in a spot of Yankball with Giants quarterback Eli Manning.

Milnfish almost takes a surprise battering from interloping 6’4″ Giants linebacker/meatwall Zak DeOssie on his turn, though you can’t help but feel that Milner, ever the sturdy Yorkshireman, would’ve probably ploughed straight through him given half a chance…

Impressive, especially as Hart was running wide receiver in a pair of flip-flops. As far as we’re aware, they’re not exactly standard issue in the NFL.

Oh, and if you’re wondering what we’re yammering on about with all this “Hartdog” nonsense, then it’s merely a timely pop culture reference to Joe’s fancy dress costume from a couple of years ago… 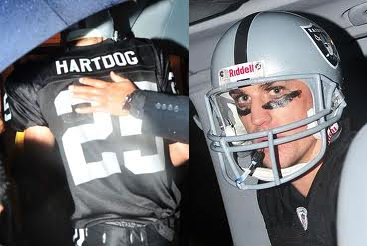 As for “Milnfish”, well we just plain made that one up.