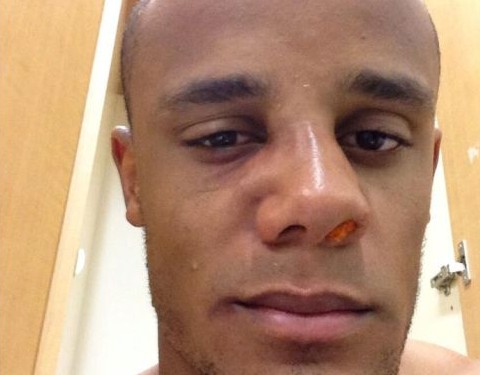 Vincent Kompany took a thump in the chops from Serbia ‘keeper Vladimir Stojkovic with about half-an-hour gone of Belgium’s 2-1 win over their World Cup Qualifying Group A rivals.

The blow made Kompany visibly woozy but the Belgian captain was back on the pitch after a couple of minutes of blood-letting on the touchlines and played on for the rest of the game without any noticeable issues.

Afterwards Vinnie was taken to the Saint Martin’s Hospital in Mechelen for a check-up where it was found that Kompany had suffered not only a broken nose (a “displaced nasal fracture” to be precise) and a bit of a black eye, but also a mild concussion and a crack in his eye socket.

Judging by the photo, he may have also got a rogue Cheetoh stuck up his snooter by mistake too.

Having posted the above image on his Twitter feed, Kompany included the message “What wouldn’t you do for your country, hey?”