It’s an overused phrase at the best of times but they really don’t make players like Bernhard Carl “Bert” Trautmann these days: the legendary (in the truest sense of the word) German keeper who made 545 appearances for Manchester City in a 15-year stint at Maine Road between 1949 and 1964.

No doubt many of you are aware of his intriguing story by now, but we’ll trot it out again once more in potted terms for those who aren’t familiar: Serving both as a Luftwaffe signalman and as a paratrooper in WWII, Trautmann deserted the German army in 1944 and eventually wound up at a British signals unit near his hometown of Bremen.

He was duly sent to a POW camp in Lancashire, eventually winding up playing for the “Camp 50” football team, impressing in goal after only taking up that particular position due to a foot injury. Having refused an offer to be repatriated back to Germany, Trautmann remained in England, working on a farm near St Helens and playing football for non-league St Helens Town before finally being scouted by Man City.

The former Luftwaffe soldier signed professional papers with City on 7th October, 1949 – though, as you can probably imagine, many City (whose captain, Eric Westwood, was a veteran of the Normandy landings) fans weren’t overly keen on having a “kraut” starting in goal for their club – especially given that the country was still recovering from the effects of the Nazi blight and that Trautmann was replacing Frank Swift, one of the finest goalkeepers in City’s history.

However, Bert slowly won around cynical City fans (though not without being hounded for being a “Nazi”, etc on the terraces every week) with his heroic dedication to keeping all opposing strikers at bay, resulting in him quickly becoming established as a fixture betwixt the sticks at Maine Road.

His most famous achievement came in 1956, and in the FA Cup Final of that year to be precise, when, with City 3-1 and 75 minutes gone, Trautmann was knocked out cold in a collision with Birmingham City forward Peter Murphy.

The blow was later found to have dislocated five vertebrae in his neck, the second of which being broken in two, but miraculously Trautmann came to and somehow managed to play the remaining 15 minutes of the game – repelling every single shot that was taken at him.

Legend has it that when handing over Trautmann’s winners medal, Prince Phillip passed comment on how crooked Bert’s neck looked. Little did he know just how close the City keeper had come to losing his life that day.

Sadly, Bert Trautmann has passed away today at the age of 89 having suffered two heart attacks already this year. Here’s a collection of brilliant photos plucked from Pies’ archive of the great man in his pomp… 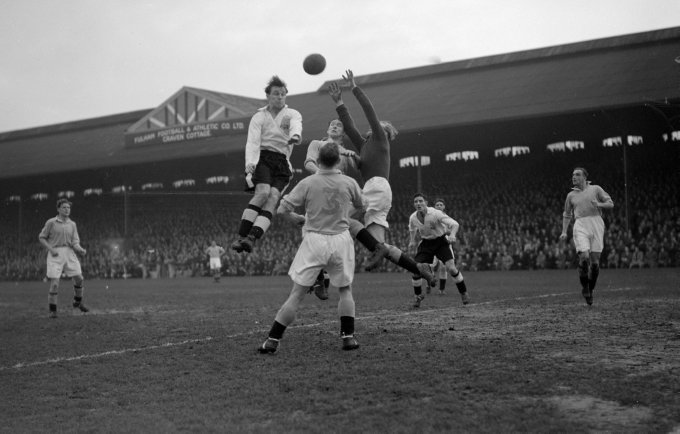 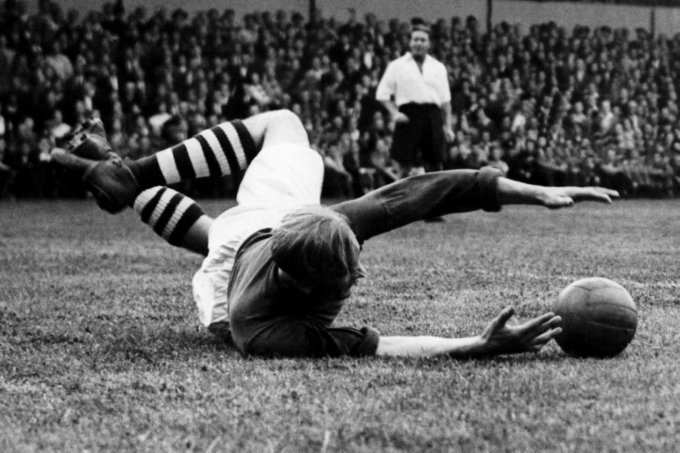 Bert Trautmann gets down and makes the save for Manchester City, 1952 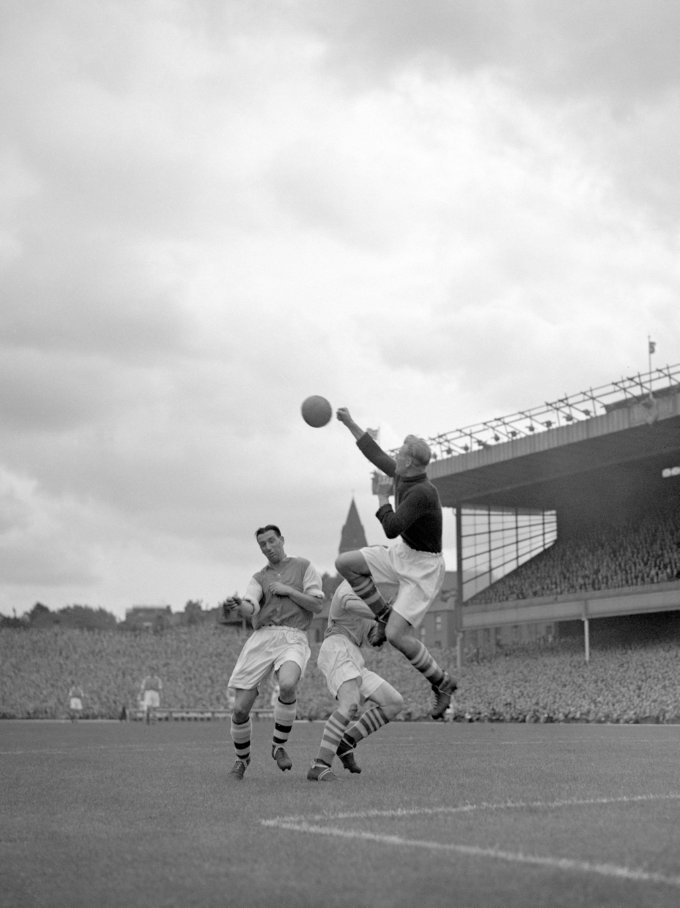 Arsenal striker Tommy Lawton is thwarted at Highbury by the ever-vigilant Bert Trautmann, 1953 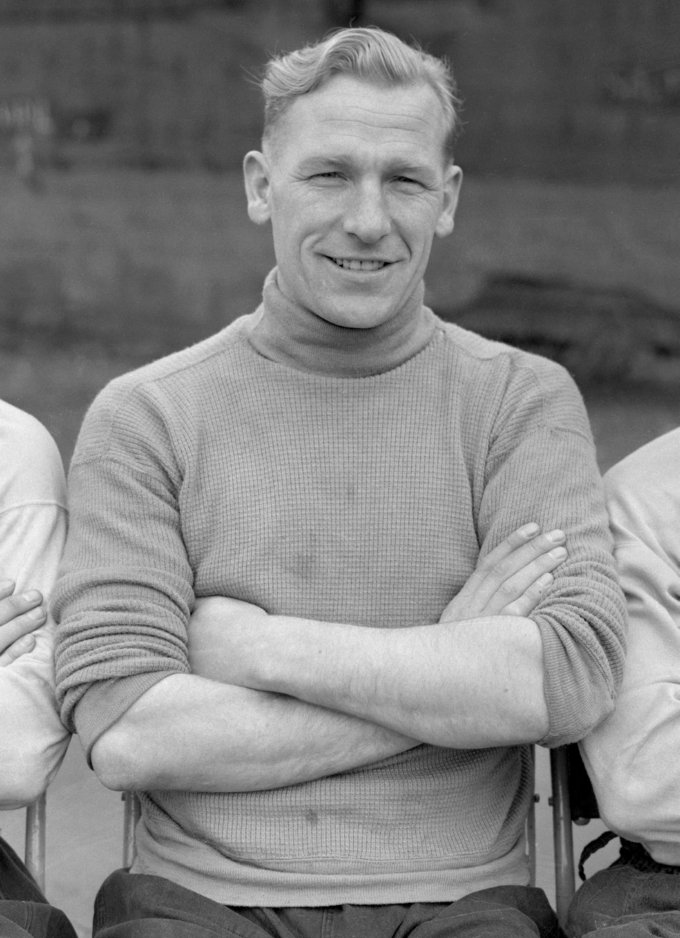 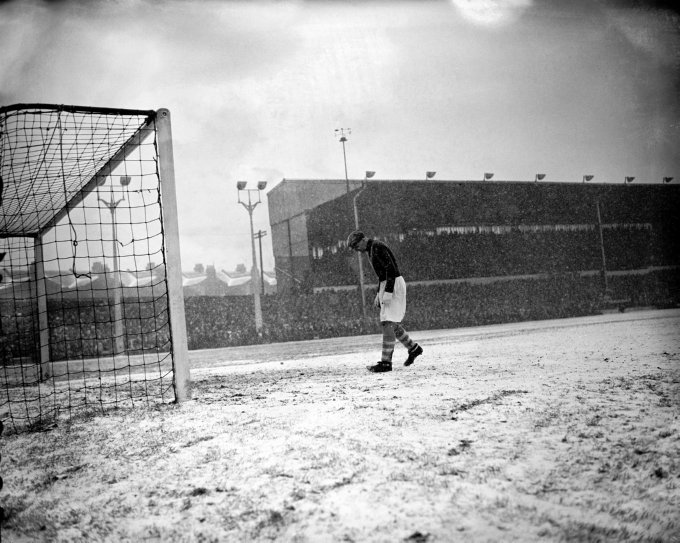 Bert Trautmann turns his back on the play as snow is whipped into his face during Manchester City’s chilly FA Cup tie against Luton, 1955 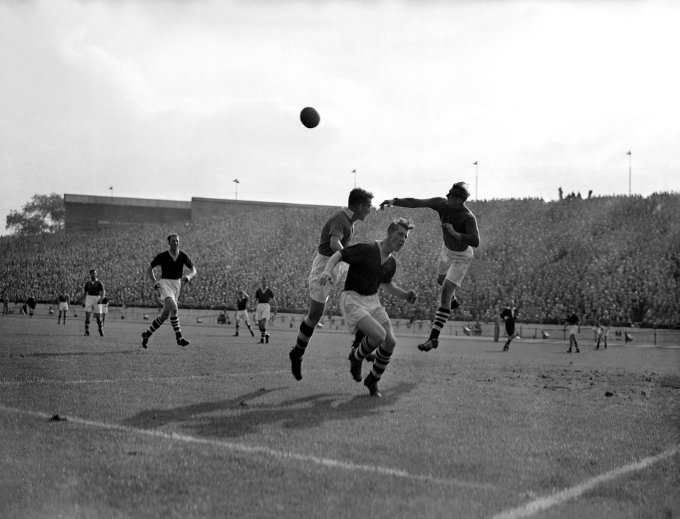 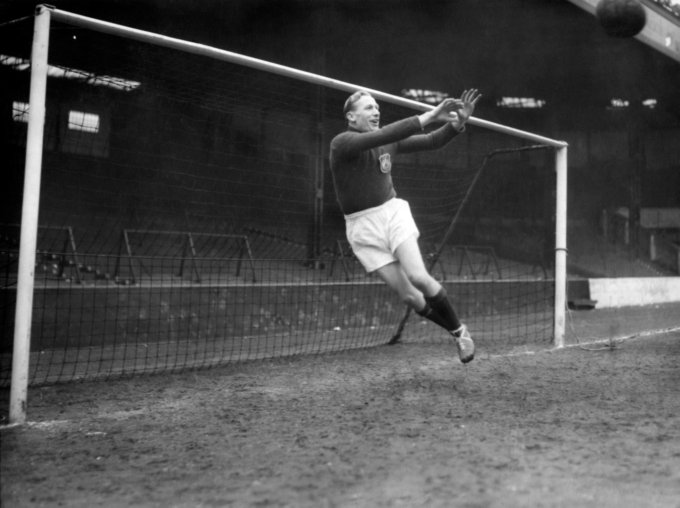 Recently-crowned Footballer of the Year, Bert Trautmann warms up at Maine Road a few days before the FA Cup Final against Birmingham at Wembley, 1956 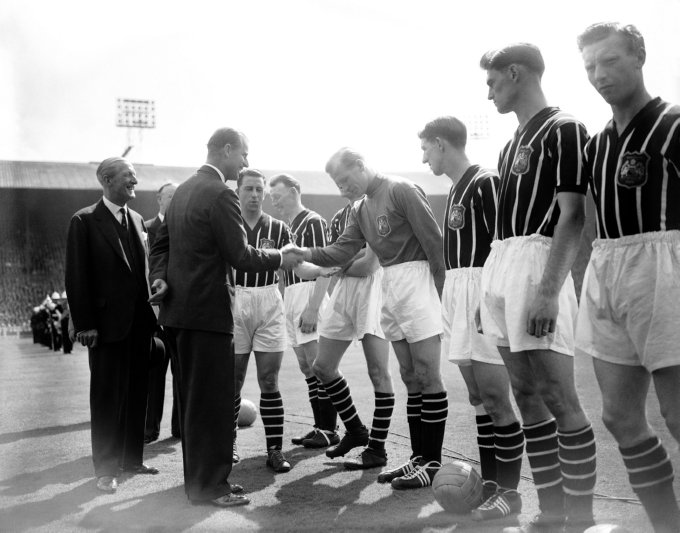 Manchester City keeper Bert Trautmann bows his head as he is introduced to HRH The Duke of Edinburgh (Prince Phillip) before the FA Cup Final, 1956 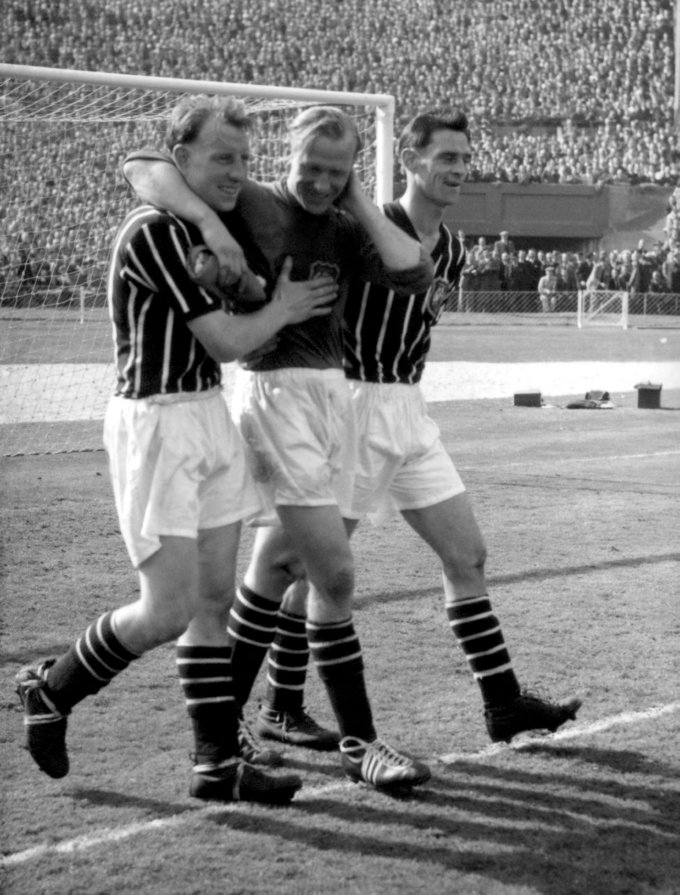 Bert Trautmann is escorted to the touchline by his Manchester City teammates after injuring himself in the line of duty during the FA Cup Final against Birmingham City at Wembley, 1956 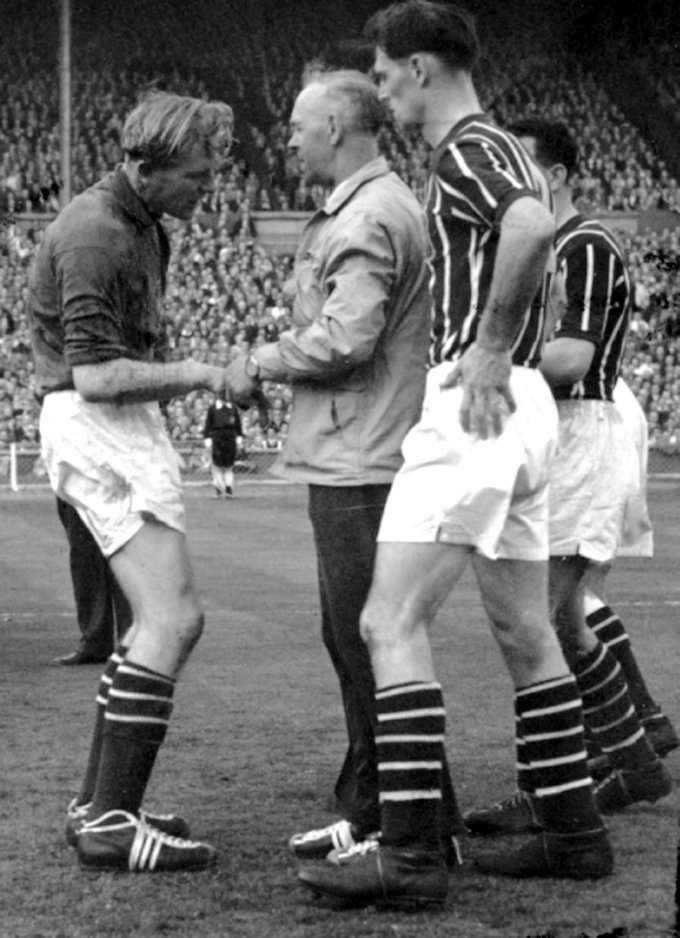 Manchester City trainer Laurie Barnett checks on the condition of groggy goalkeeper Bert Trautmann during the FA Cup Final against Birmingham, with the German later found to have broken his neck while making a save, 1956 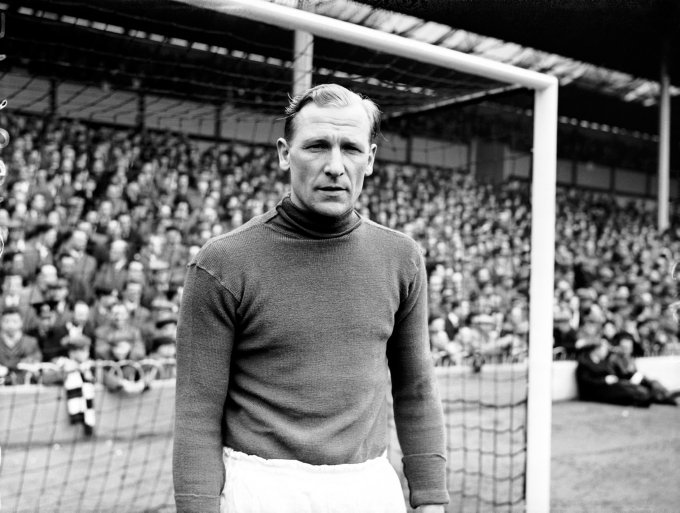 Seven months after breaking his neck, Bert Trautmann returns to the Manchester City first team for the Division One game against Wolves, 1957 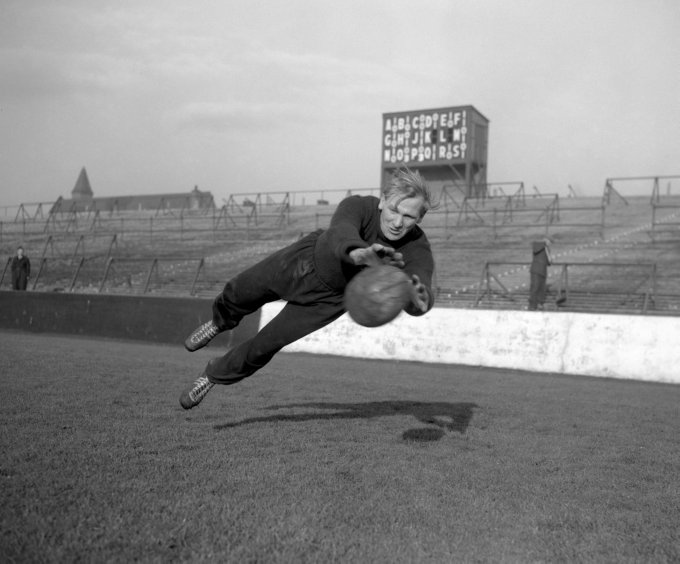 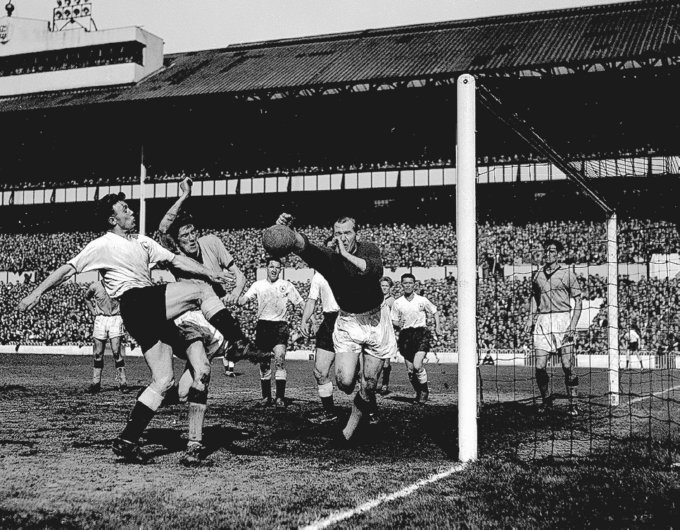 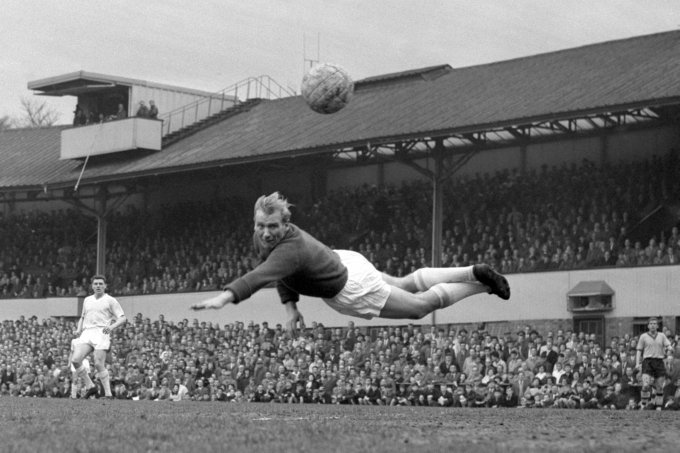 Bert Trautmann dives through the air to tip a shot from Wolves’ Ronald Flowers past his post, 1961 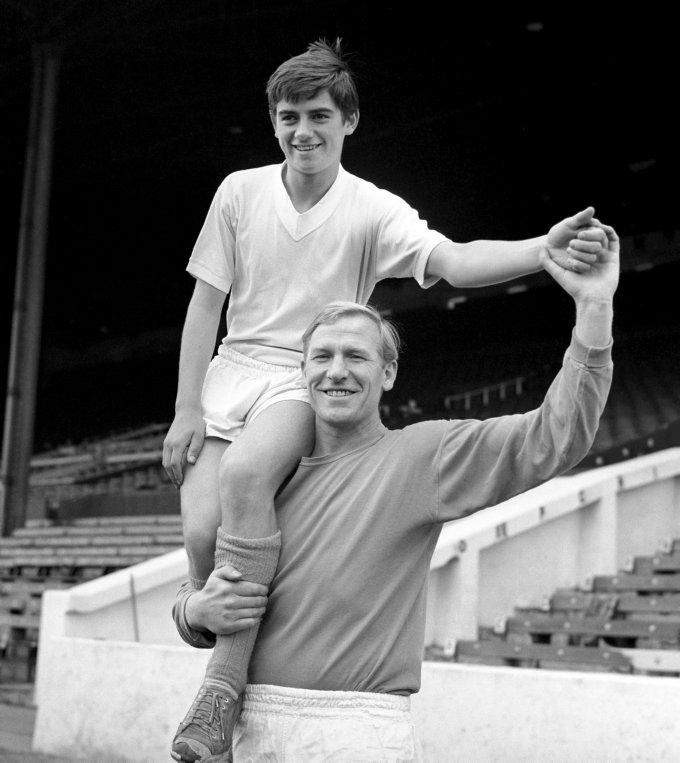 Bert Trautmann, by this point one of Manchester City’s longest-serving players, hoists one of the club’s youngest signings, 16-year-old Bob McAlinden, onto his shoulders for a photo at Maine Road, 1962 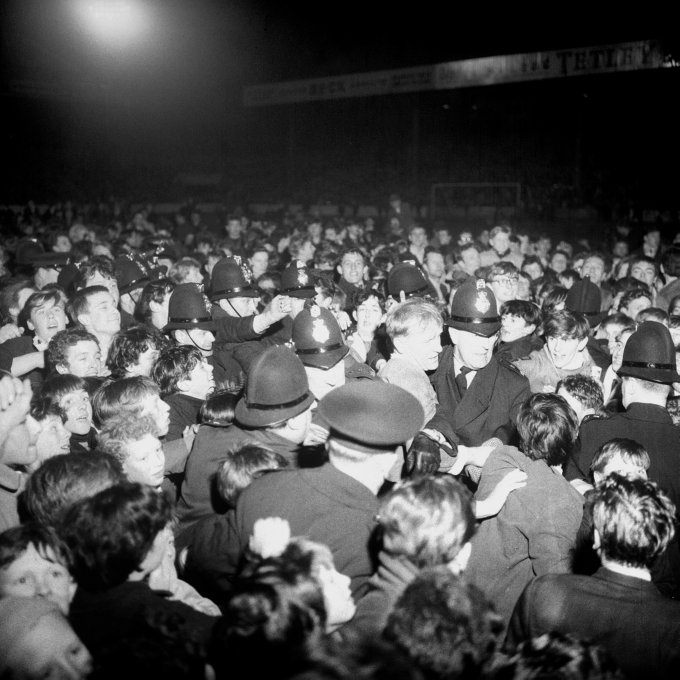 Police struggle to get Manchester City goalkeeper Bert Trautmann through the swarm of fans who mobbed him after his testimonial at Maine Road, 1964. The game saw a combined City/United XI (featuring Bobby Charlton and Denis Law) against an England XI which included Tom Finney, Stanley Matthews and Jimmy Armfield, with the combined Manchester side winning 5-4. The official attendance was listed at 47,000 though it is estimated closer to 60,000 fans turned out to wave their hero off.