Manchester City secured a dramatic late comeback win at Vicarage Road, a victory which sees them keep the pressure on league leaders Arsenal. 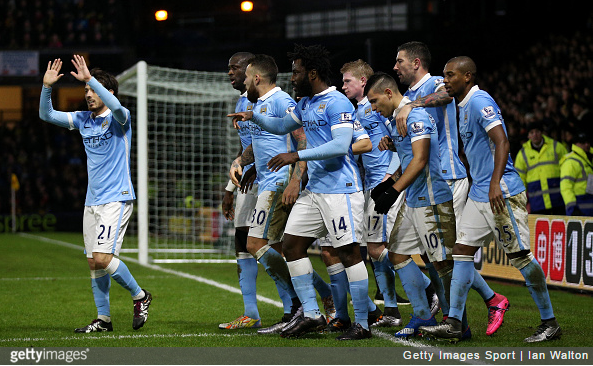 Watford have been one of the surprise packages of the season, and they once again produced an energetic display, with forwards Troy Deeney and Odion Ighalo a constant threat. Indeed, the latter forced Joe Hart into a fine save after superbly outfoxing Nicolas Otamendi in the City box. However, it would be a Man City player who would give the Hornets the lead, with Aleksandar Kolarov heading a Ben Watson corner into his own goal.

After the break, the Citizens pushed for an equaliser, and eventually it came, on 82 minutes, when Yaya Touré produced another fine late strike from a Kolarov centre. Then, just two minutes later, Sergio Aguero produced a fantastic header from an equally superb Bacary Sagna cross to secure a hard-fought, precious win for the title-chasers.

With Arsenal winning against Newcastle, a defeat for City would have seen them drop six points behind the Gunners. However, instead they are now just three points back, with Manuel Pellegrini no doubt now hoping the dramatic victory will kickstart his side’s title tilt in the second half of the season. As for the Hornets, boss Quique Flores is sure to be pleased by his team’s display, despite the lack of points.