Romelu Lukaku once again proved to be the match-winner for Everton as the Toffees’ secured a dramatic 2-1 victory over Man City at Goodison Park. 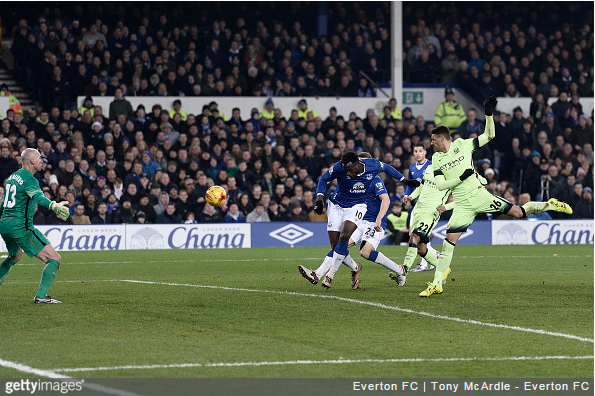 The Toffees were impressive throughout, with Gareth Barry dictating play from the centre of the park and overshadowing a quiet Yaya Touré.

The hosts had a couple of goals chalked off for offside before Ramiro Funes Mori netted just before the break. However, the Citizens will feel that that goal too should’ve been disallowed, with Lukaku standing in an offside position in front of ‘keeper Willy Caballero. Despite the visitors’ protests, Robert Madley judged the Belgian not to be interfering with play, leaving the Toffees with a one-goal advantage at the break.

In the second-half, City pushed for the equaliser and it eventually came on 76 minutes. Jesus Navas was the unlikely source of the goal, with the Spanish winger netting after a superb counter-attack from the Citizens. However, that lead only lasted two minutes, with the in-form Lukaku converting a superb Barry centre to give his side a 2-1 lead ahead of the second-leg.