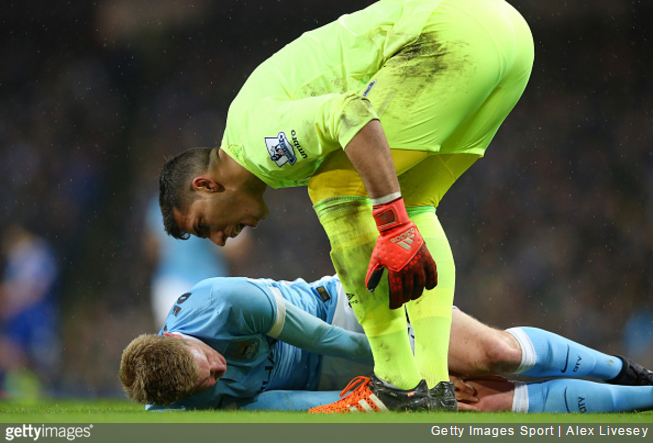 Everton goalkeeper Joel Robles has publicly apologised to Kevin de Bruyne after his reaction to the Man City winger’s injury during last night’s Capital One Cup semi-final at the Etihad.

Joel stood over De Bruyne and chastised him for play-acting following a seemingly innocuous collision with Everton defender Ramiro Funes Mori in injury time. However, the Belgian left the pitch on a stretcher and was later found to have suffered knee ligament damage.

Suitably contrite, the Spanish stopper took to Twitter after the game to apologise for his conduct and wish his stricken opponent a speedy recovery…

I would like to apologise to Kevin De Bruyne for my reaction to his injury. In the heat of the moment I didn’t realise he was badly hurt. ..

I wish him all the best and a speedy recovery

Nice to see. Maybe if players didn’t feign and scream every time they fall over it’d be a bit easier to ascertain genuine injury as and when it occurs.