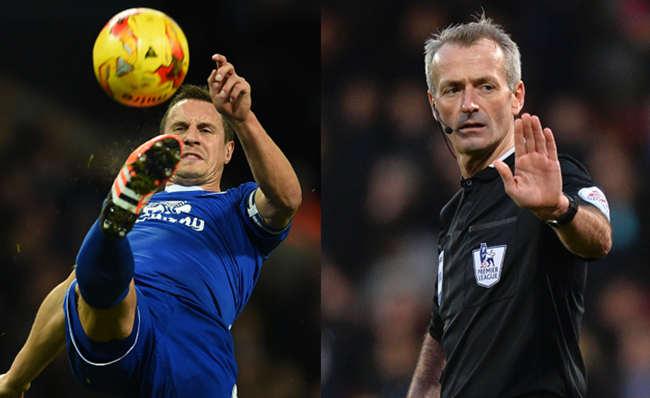 Everton were left feeling hard done by after being shunted out of the Capital One Cup last night by Man City, who took the upper hand in the semi-final thanks to a controversial Kevin De Bruyne goal.

The ball looked to have clearly crossed the line before Raheem Sterling cut a cross back for the Belgian to whack in City’s second goal of the night, but the goal was allowed to stand regardless.

Everton boss Roberto Martinez later branded his side’s exit as “hurtful and unfair” as City went on to secure a 4-3 aggregate win and safe passage through to the final.

Phil Jagielka was also left fuming after the game but for a slightly different reason.

While venting to BBC Mersey Sport after the game, the Toffees centre-half branded referee Martin Atkinson “arrogant” after claiming that the official refused to listen to his complaints and instead sarcastically congratulated him on his defending.

I tried to (speak to Atkinson). He told me that my defending was brilliant.

It’s difficult when things start going the wrong way and (the officials) start getting a little bit arrogant but unfortunately that’s the way it goes.

Pretty shoddy from Atkinson if true, you’d have to say.