Remember this guy? I bet he feels AWESOME right now… 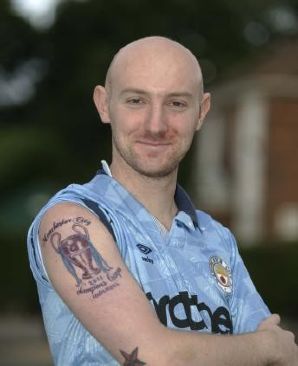 Krazy Kirk expains his tat: “While I was in the pub one night I was saying how I thought we’d win the Champions League next season and my friend turned to me and said ‘If you’re so sure why don’t you have it tattooed?’

“He was obviously joking, so you can imagine his face when I turned around and said ‘OK then!'”

He who laughs last laughs loudest, thought Kirk, not realising that when the laughter has died down, the tattoo would still be there.

A version of this post was first published in August 2009 – well, Kirk, your team got very close, but no cigar