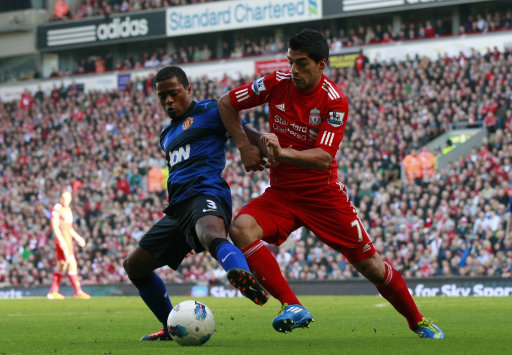 Patrice and Luis, in happier times

This weekend is FA Cup fourth-round weekend, and the headline affair is the first meeting between Liverpool and Manchester United since that whole sordid Suarez/Evra ordeal swelled up, became painfully inflamed, burst through the abdominal wall of public consciousness and then scabbed over like a big racist hernia.

I can’t say I’m particularly looking forward to it myself, there’s an uneasy feeling in my waters – not because of the prospect of the game itself, but because of the atmosphere I can’t help but anticipate at Anfield after a month or two of heightened antagonism, baiting and hostility between two sets of fans that don’t need much of an excuse to go for each other’s jugulars.

Players from both sides have appealed for an air of ‘rivalry’ rather than ‘hatred’ from their respective supporters, and Sir Alex has kindly requested that all ribbing be saucy but above the belt at all times. Here’s hoping their pleas for decorum don’t fall on deaf ears. Which they almost undoubtedly will. Some chump will have spent the intervening weeks crafting and circulating a pithy chant or two, you can bet your bottom €uro.

Anyway, let’s not get bogged down in negativity. In the interests of hindsight and bragging rights, can we have your scores on the doors for the game itself please?

Pies says: I’m plumping for a tit-for-tat game that will see United go in 1-0 up at half-time and eventually run out as 3-2 winners by full-time – with at least one red card chucked in for good measure…