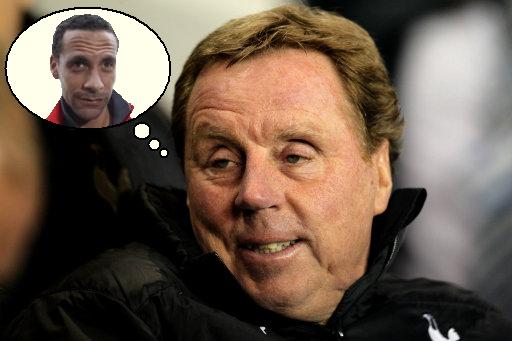 As we’ve gradually found out over the past week-and-a-half, Tottenham manager Harry Redknapp takes his tax advice from a magical hobgoblin that lives in his biscuit tin. What we also now know is that, instead of his labrynthine scouting network at Spurs, he seems to rely on Manchester United’s Rio Ferdinand when it comes to the final word on his signings.

Here’s our ‘Arry, waffling away after bringing in Emmanuel Adebayor on loan from Man City back in mid-August of last year:

“I spoke to Rio Ferdinand the other day and he said himself and Vidic thought Adebayor was the most difficult opponent they had played against.

“I said I might be taking Adebayor and he said he was always their toughest opponent, caused them more problems than anyone else.”

Now couple that with Redknapp’s spiel after securing the services of Everton’s Louis Saha on Tuesday evening:

“I can remember speaking to Rio Ferdinand and he said Louis was the best forward he’d ever played against.”

However, as our pals over at Anorak are quick to point out; if the Saha pointer is anything to go by, it seems like our Rio may actually be acting as some kind of cunning double agent.