Police have confirmed that the confiscated all of the copies of the United fanzine, Red Issue, that were floating around outside Old Trafford today which featured cut-out ‘Suarez Is Innocent’ Ku Klux Klan masks for United fans to hold in front of their faces to bait Liverpool as the teams emerged from the tunnel. 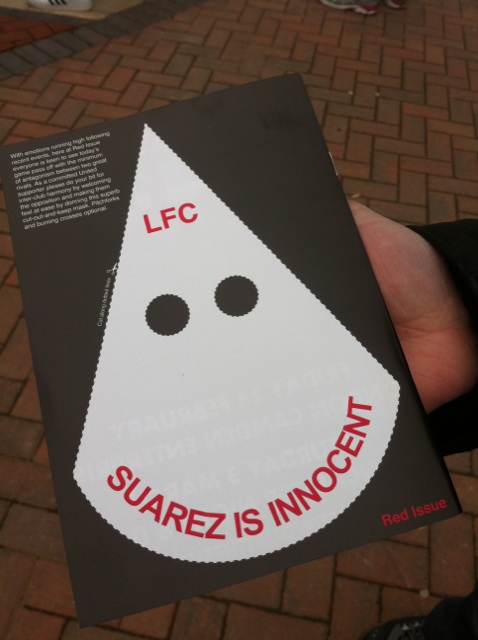 It’s just a ghost right? The ghost of Suarez’s innocence?

“Shortly before kick-off we were made aware that a Manchester United supporters’ fanzine was being sold outside Old Trafford featuring a potentially offensive image.

“We have seized the fanzines and masks] as both items are potentially offensive and we cannot be in a situation where hundreds or thousands of people were displaying offensive images at a football match.

“The consequences of taking no action could have resulted in public order incidents inside or outside the ground.”

But officer, it’s only BAAAAAAAAANTAAAAAAAH!!!!