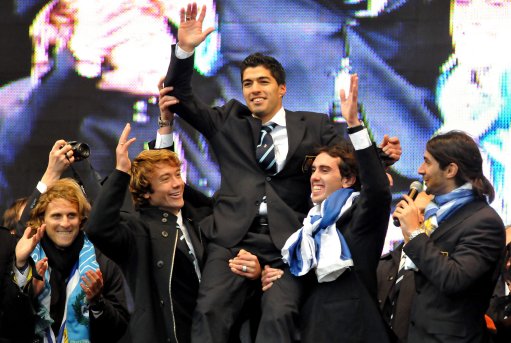 Luis Suarez is congratulated by Lugano and co. after refusing to shake Evra’s hand

Never one to miss out on a good fight, Uruguay captain Diego Lugano has waded into the Suarez/Evra debacle by publicly backing his fellow countryman. The tough-tackling (bordering on psychotic) Lugano said:

“You have to have balls to do what Luis did on Saturday. He followed his principles. We live in a democracy, and if you do not want to greet someone, you do not do it. And less so if that person has made you experience some bad moments.”

“He has gone through a few months he did not deserve. Everyone in football knows it is a big circus. Take into account that England is historically a colonial country and racism is a sensitive subject, but we all know it has nothing to do with what happened between Luis and the Manchester United player.”

“It’s a football argument, and many false moralists and hypocrites have profited, and Luis is the only innocent party in this situation.”

There goes any chance of a dream move to Old Trafford for the PSG man, then.