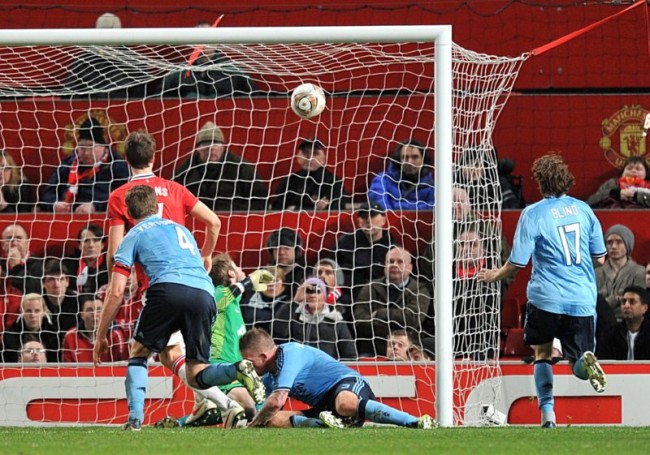 Like the scene in The Temple of Doom when Indiana Jones snatches his dusty fedora back from under a closing door in the nick of time, Manchester United made it through to the last 16 of the Europa League by the skins of their collective teeth at Old Trafford – losing 2-1 on the night and having to ride out a nervy finale and rely solely on their first-leg victory in Amsterdam to skirt through to next round on aggregate.

Javier Hernandez put United one up after just six minutes with a comfortable win looking like a formality for the majority of the first-half as the home side swarmed and Ajax struggled for a foothold – right up until Aras Ozbiliz caught one sweetly and levelled proceedings from 20-yards five minutes before the break.

The second half was a different story entirely, with Ajax the better side for long periods as United tailed off and lost momentum, with Siem de Jong forcing a lightning reaction save from David De Gea with a point-blank header on the hour-mark to keep the score in the home side’s favour.

Having looked prematurely resigned to their fate beforehand, Ajax swelled, pressed and harried as the time wicked away, with all the fun and frivolity coming to a head when Toby Alderweireld headed home in the 87th minute to nudge the Dutch side ahead and within one aggregate goal of knocking United out.

However, in reality, it all came a bit too late. United battened down the hatches for the remaining few minutes and duly advanced to the next round where they will now meet Athletic Bilbao.