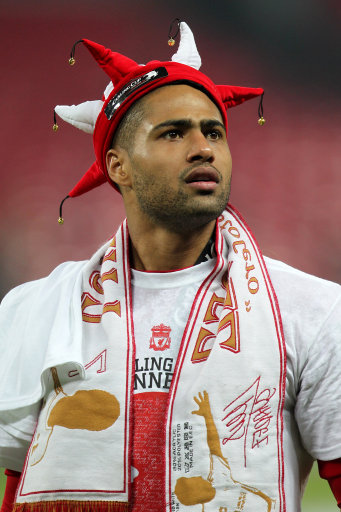 Let sleeping dogs lie and all that? Not in Glen Johnson’s little book of happiness, oh no. The Liverpool and England defender has booted some life back into the ailing Suarez/Evra debacle today by talking about the incident, at length, in the Daily Mail.

In the article, Johnson blames Patrice Evra for the whole handshaking controversy, saying:

“Evra was clever at Old Trafford. Because – I’m not being funny – but if I wanted to shake your hand I would stick it right out in front of me like that. But if my hand is down here, almost by my side, then it’s because I really don’t want to shake your hand.”

“Luis didn’t shake his hand because Evra’s hand was down there. What else is Luis supposed to do? Would you go to shake someone’s hand if their hand is way down there by their side? Course not. But then, because Luis didn’t do it, Evra has pulled him back by his arm as he walked on, as if to say to everybody: “Look, I wanted to shake his hand and he didn’t…”

“He’s following Luis with his eyes as if to say: “Right he’s gone, he’s gone (past me) so I’ll pull him back now…” Evra probably stayed up all night thinking about how to do that. The whole thing was ridiculous.”

The former West Ham man then goes on to brand former Man Utd great Paul McGrath, who had suggested that rather than wear that infamous Suarez-supporting t-shirt, Johnson should have thrown his on the ground, a ‘racist’. He said:

“The McGrath thing … that’s actually racist. Saying what he said is racist. He is only saying that to me because I was the only black lad wearing the T-shirt. He’s targeting me because of my colour.”

“Listen, I’m my own man. If I have something I want to say or do then  I will do it. The reason I wore the  T-shirt is because I know 100 per cent Luis Suarez is not racist. He is one of the lads in the team that I get on with best of all at the club.”

You can read the whole thing here.

Whatever Johnson’s thoughts on the matter, surely for everyone’s sake, it would have been more sensible to move on from the incident rather than start the whole debate again?