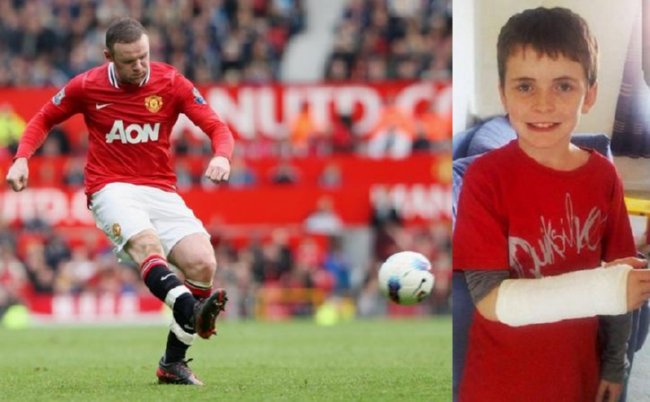 As you may have heard yesterday, Wayne Rooney inadvertently broke a nine-year old lad’s wrist last Sunday when a wayward shot cannoned into the crowd during the warm-up at Molinueux.

Sitting in the front row of the Jack Harris Stand with his old man, young Jamie Thomas (attending his first ever United game) had the misfortune to be on the receiving end, putting his hands up to stop Rooney’s shot from hitting him square in the face and fracturing a bone in his wrist in the process.

This ‘ere is the wayward shot that did all the damage…

Said Jamie, post-match and with a fresh cast on his arm:

“It all happened so fast, one minute I was watching Wayne take shots at goal and the next the ball was flying towards me. It was coming really fast and I just put my hands up.

“I felt like a rocket had hit my arm but I was buzzing because Wayne had kicked it. I thought my arm and wrist was okay but it was getting more painful.

“I missed most of the second half but it was worth it. I think it’s brilliant that Wayne Rooney broke my wrist. Everyone at school wanted to sign my plaster cast.” 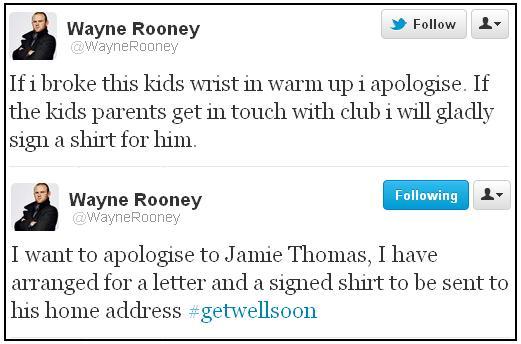 If that’s the way it works, I’d now like Mr Rooney to reimburse me for the mini-fridge that he forced me to hurl down a flight of stairs while watching England toil away against the mighty Algeria to no avail during the 2010 World Cup.