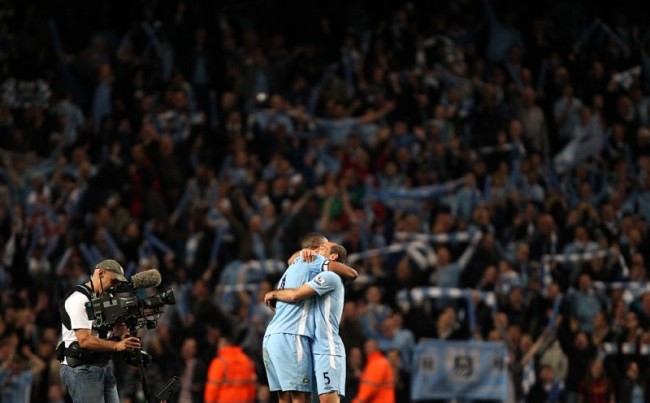 As with any game that receives such monumental, gladitorial hype beforehand, last night’s ‘bigger than Jebus, winner takes all’ Manchester derby was a largely run of the mill affair – Vincent Kompany’s craning header seconds before half-time sealing the win for City in a game where United failed to register a single shot on target.

City were the better side; City won. That’s just about the long and short of it. United played Park Ji-Sung,  which should tell you all you need to know about their approach.

Roberto Mancini and Sir Alex Ferguson had a wee pop at each other as things got fractious towards the end, but it didn’t really escalate into anything more than a quick run through the tried and true touchline ‘tweety bird’ routine.

So, three weeks after being faced with closing an eight-point chasm at the top, City go top thanks to their +8 goal difference. Two games left; Newcastle and QPR. Can anyone see them slipping up from this vantage point?