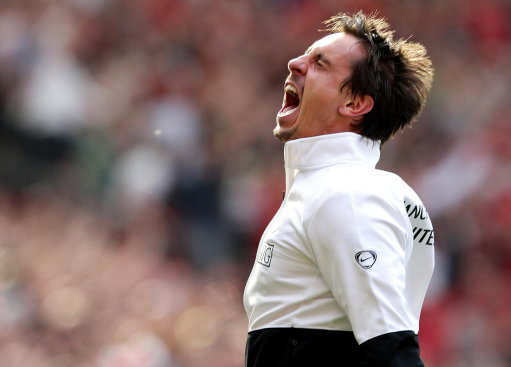 Woo. Did not see that coming.

Days after seeing his ‘Barbie Dream Hotel’ plans approved, the good news continues to flood in for Gary Neville, who has been appointed as a coach on Roy Hodgson’s England staff on a four-year contract with the FA. Neville holds both UEFA ‘A’ and ‘B’ coaching licenses which means that he’s good to go for EURO 2012.

“Roy asking me to be a part of his staff and to work with the national team is not only an honour but a very special moment for me. I had absolutely no hesitation in accepting this role and I am relishing the opportunity to work alongside Roy and the team at the Euros and through to the next two tournaments.”

“Gary has achieved so much in the game as a player with Manchester United and England,” said Hodgson. “He has obtained UEFA coaching qualifications and will be tremendously respected by the players because of his vast experience as a player.

“At my first meeting with The FA, I explained that Gary was someone I wanted as part of my staff. I think it is very important we have a younger coach who knows the dressing room and is very experienced at international level. That he has represented England as a player at five major finals tournaments will make him an invaluable member of staff.”

The man’s been talking a lot sense since landing the Sky Sports punditry gig, let’s hope he applies the same logic.

Question is, will Phil be next?