Michael Owen has, as of a few minutes ago, announced that Manchester United have decided not to offer him a new contract and that he will be released as of June 30th having not started a league game since 2010… 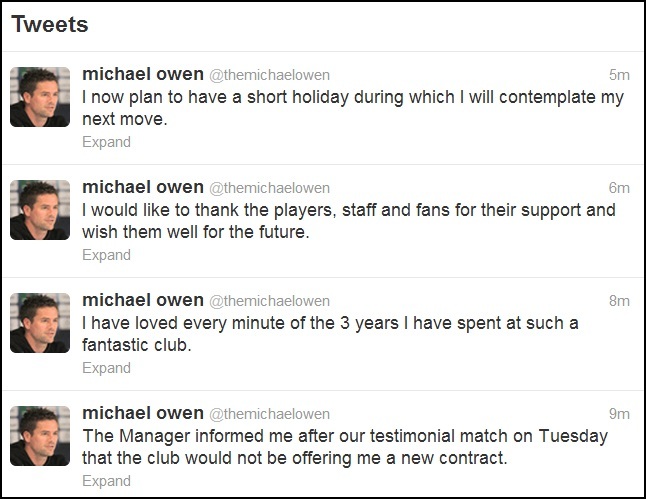 That’s right, take a holiday son. Boy, do you need one.

The ‘testimonial’ that @themichaelowen is referring to there is Harry Gregg’s – a game against an Irish League XI on Tuesday night which United won 4-1. Owen was handed a rare hour-long run-out in a fairly strong United side, and perhaps thunked the final nail into his Old Trafford coffin by registering a truly dismal miss…

Now, it’s probably nowt but unfortunate coincidence, but the fact that the news came through directly after that howler is certainly fitting. Apparently, it was called offside to save a bit of face – though straying off in that position may arguably be even more risible than the miss itself.

With United obviously keen on finding someone else to score all their League Cup first round goals for them, what now for L’il Micky and his chewing gum hamstrings? He’s famously gone on record as saying he’ll never ‘move down the league’ and tarnish his CV with the likes of smelly Aston Villa, etc – though that might have to change now, given he would represent little more than a relatively expensive gamble in terms of wages.

Pies’ shout? Let us just compile a list of ‘clubs with grounds within a 15 mile radius of a racecourse’ and get back to you.