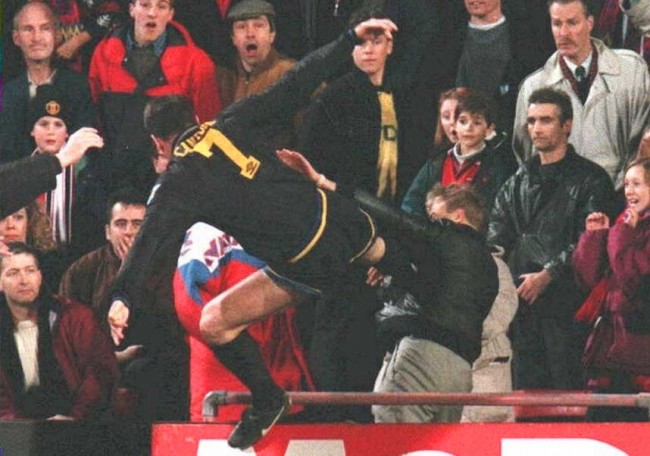 We imagine that Sergio Aguero’s last-minute title-clinching goal against QPR on the final afternoon of 2012/13 had more than a few Manchester United fans thrashing the ever-loving heck out of their furniture, pets, loved ones, etc, and it would appear that one Eric of Cantona was no different.

Eric’s son, Raphael, has been recounting the story of the last day of the season at Casa del Cantona, telling a fellow United fan, 21-year old Jonathan Cruise (the pair met over a ciggy outside a nightclub in Barcelona), that his old man Kung Fu kicked his living room coffee table into oblivion like it were little more than a gobby Crystal Palace fan when Aguero stuck home the decisive goal at the Etihad on that fateful day.

Cruise relayed Raphael’s account to the Daily Mirror: “[The table] smashed to pieces. My dad was angry and upset. He still adores United and we thought they were going to hang on to the title.”

Cruise then explained: “It was about 2am and I had gone outside the club for a cigarette. A guy kindly asked me for a cigarette so I gave him one and he then asked me where I was from.

“When I said ‘from Manchester’ he smiled. He went on to ask me if I was a blue or a red and when I said ‘red’ he smiled even more.

“He went on to say ‘my father is the king in Manchester’ and when I asked what he meant he said his dad was Eric Cantona.

“He went on to tell me what had happened on the last day of the season with a big grin on his face. He said the coffee table just disintegrated onto the carpet and we had a laugh at what had happened.

“I told him it was a pleasure to meet Cantona’s son and we shook hands.

“When we got back to England we checked his Facebook account and there is no doubt it was definitely Raphael. He was a sound guy. It shows just how passionate his dad still is about United.”

‘Passionate’ is one word for it Raph, though we prefer ‘completely bat-shit-insane-cuckoo-for-cocoa-puffs crazy!’