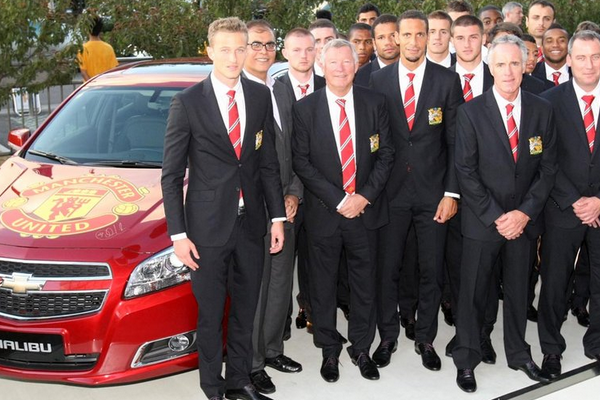 “Get a good look at it you young’ns – because it’s the last time you’ll ever bloody see it!”

With Chevrolet coming in as Manchester United’s shirt sponsor as of 2014/15, Sir Alex has already put a brisk kibosh on any of his younger players’ dreams of milking a gratis high-powered Yank Tank out of the company – banning all players under the age of 23 from accepting anything too sporty from the Chevy range.

Most of the senior players have apparently been eyeing up Corvettes and the like, but United have confirmed that the cars doled out will be relevant to the players’ age, length of service and driving ability:

“As with most automotive partnerships, Chevrolet will be offering players a car. The model will be dependent on their time at the club and driving experience.”

So that means it’s frugal, sensible, 75 miles-to-the-gallon crap boxes for the likes of Phil Jones, Danny Welbeck, Rafael, David De Gea, Chris Smalling, etc. Still, before we get too boo-hooey, it’s not like they can’t afford to go out and buy their own cars, now is it?