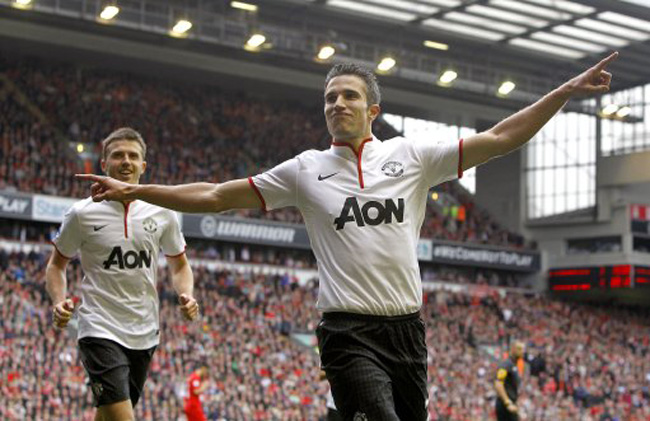 The afternoon opened with a moving tribute to the victims of the Hillsborough victims followed by a handshake between Patrice Evra and Luis Suarez. And with Anfield full of good feeling, the home side came out of the traps quickly. Indeed, for large parts of the game, the Reds looked the more likely to win, but ultimately failed to make their dominance count.

The sending-off of Jonjo Shelvey for a studs-high challenge on Jonny Evans was no doubt a massive moment in the game. However, arguably the United man, who also went in two-footed, should have received his marching orders too. Still, despite going a man down, it was the home side who struck first, courtesy of a Steven Gerrard strike on 46 minutes.

After the break, United eventually clawed their way back into the game, first via a fine strike from Rafael and then, in the last 10 minutes, when Robin Van Persie converted a spot-kick after Antonio Valencia has been fouled.

It was harsh on Brendan Rodgers’ side to come out of the game with no points, but with Fabio Borini yet to make an impact, a lack of a cutting edge up front remains a serious issue, particularly with only two points gained from five games. Fergie’s men, on the other hand, will be thanking their lucky stars after a poor performance.

Oh, and while the travelling support were superbly behaved before and during the majority of the game, reports of the old ‘always victims’ chant towards the end won’t have impressed either club’s officials.