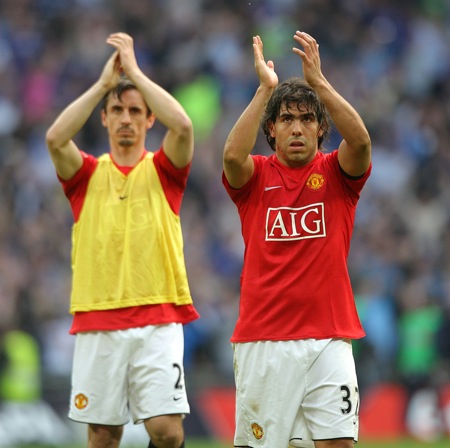 At last, a player comes out and says what so many fans have been thinking for almost 20 years.

Carlos Tevez called Gary Neville a “boot-licker” and a “moron” in a radio interview with ESPN Argentina:

“My celebration was directed at Gary Neville. He acted like a complete boot-licker when he said I wasn’t worth £25m, just to suck up to the manager. I don’t know what the hell that idiot is talking about me for. I never said anything about him.

“I will never show a lack of respect towards anyone. Just as I was running off to celebrate the penalty I had scored, I came across Gary and I said to myself: ‘Shut your trap, keep quiet.’ I didn’t go overboard in my celebration and it was directed at Gary, not at Ferguson and not at the fans. I think he did the wrong thing because I was his team-mate and I never said anything bad about him. He was saying that Ferguson was right when he said that I wasn’t worth £25m, when he was saying this and that … I always respected Neville.

“… My team-mates were asking what I thought. And I wondered to myself: what’s the moron talking about me for when I never said anything about him, when there was never any [issue] with us. It was a lack of respect for a colleague, aside of the fact that we had won a lot of things together.”

So Tevez is hot-headed, fine. I can’t blame him for being a little pissed off at Neville’s mind games. Hmm, mind games, eh – I wonder who Neville gets that tendency from?

I was excited about the second leg of the all-Manc League Cup semi final even before Tevez attacked Neville. Now I can’t fricking wait. Old Trafford will be hot and spicy…

Gary Neville flips the bird at Carlos Tevez (with photo)