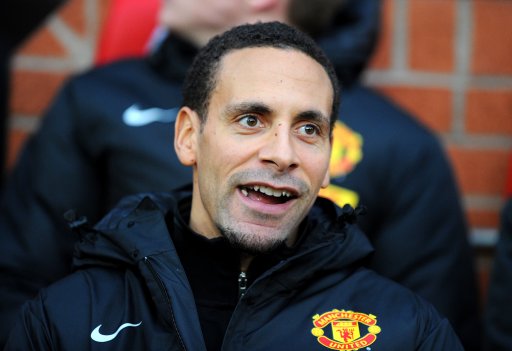 When it comes to footballers on Twitter, there’s usually not an awful lot to see; the odd resolutely neutral post-match comment, a stray lament about how foggy it is at training, selected bant – though, in a break from the norm, Rio Ferdinand used his Twitter account to do a small UK charity the power of good while on a train from Manchester to London on Wednesday.

Stunned after finding herself in the same carriage as Rio on her commute to work, charity worker Michelle Clarke texted all her friends – as you would – to let them know that she was within close proximity of the Manchester United defender.

One of the people Michelle texted was her colleague at Dance Aid (a charity which helps orphaned, exploited and vulnerable kids both in the UK and around the world), Laura Wilson, who in turn seized her opportunity to ask Ferdinand if he fancied helping her organisation out.

Laura tweeted the following message to Ferdinand’s Twitter handle, @rioferdy5: “Hey Rio any chance u might b on a train southward from Manc?! 1 of our ambassadors has spotted u! In fact she’s sitting opposite!”

Rio then stopped what he was doing (we’re guessing ‘listening to slow jamz on his beatz’) and, without a word, moved to sit opposite the oblivious Michelle in the carriage booth, chatting about Dance Aid and what he could do to help raise a bit of awareness.

We’ll let Laura herself take up the yarn. Here she is telling her story to Eurosport:

“Michelle had texted a few mates to tell them she was sitting opposite Rio Ferdinand. Some were texting back to ask for a photo, the Liverpool fans were saying, ‘Trip him over’, that sort of thing. But I said, ‘You are not getting off that train until you have spoken to him about Dance Aid!’

“She said she would never have the balls to do that, so I tweeted him to tell him an ambassador of the charity was sat opposite him. I texted her to tell her and she was going completely crazy.

“Then he initiated the conversation and she was completely flabbergasted. I think both of us thought that it was just a tweet and he wouldn’t do anything, and we were utterly amazed when he did.

“He has asked me if I could email him information about the charity and about how he can get involved, and he has been very enthusiastic about it from the get-go, presumably thanks to whatever Michelle told him.”

That Rio, eh? What a top banana!

That was a sponsored post on behalf of Feelgood Inc, a subsidiary of the Happiness & Wellbeing Group.