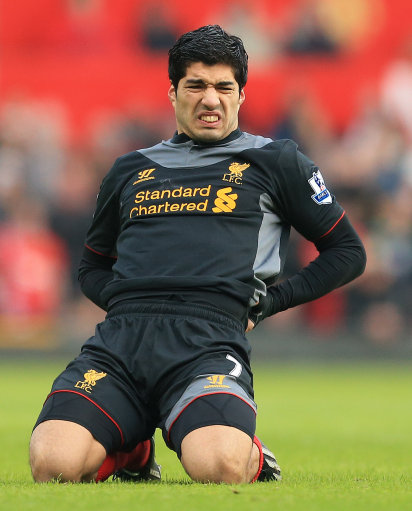 Liverpool’s Luis Suarez has been chatting to Fox Sports Argentina about his persecution complex, his ongoing experiments with gravity and the vast media vendetta against him, in which he, among other things, admitted diving against Stoke in an attempt to con a penalty earlier in the season.

There’s a “from the horse’s mouth” joke in there somewhere but we’re far too polite to make it.

At the time, Stoke manager Tony Pulis described Suarez as “an embarrassment” in his post-match interview, while Britain’s FIFA exec Jim Boyce went one step further – calling the Uruguayan forward’s conduct and diving in general “a cancer” in the game.

Having been asked about his reputation for dabbling in the dark arts and his portrayal as a relentlessly controversial villain by the national press, Suarez admitted that he did purposefully tumble against Stoke and that he’s often left questioning himself after doing some of the things he does:

“Football is like that. Sometimes you do things on the field that later you think, ‘Why the hell did I do that?’

“I was accused of falling inside the box in a match and it’s true I did it that time, because we were drawing against Stoke at home and we needed anything to win it. But after that everybody jumped up to talk – the Stoke coach and the Everton coach … I understood that the name Suarez sells newspapers.

“The other day, for instance, I touched the ball with my hand accidentally (in scoring the winner against Mansfield in the FA Cup), and I was criticised because I kissed my hand.

“The media make up a lot of things about me because they want to sell papers. I say to the media: You should talk more about football, not about other stuff.”

“When someone comes and says to me something bad about being a South American, I don’t cry, because that happens on the pitch, I have my conscience clean.

But as I have said Manchester United controls the media, they are powerful and the media will always help them.

“I can help Liverpool. We are united and we can play well. But Liverpool doesn’t depend on me.

“It’s complicated to play here in England. As Carlitos [Tevez] and Kun [Aguero] have said, it’s complicated for a South American footballer to be here as we are treated differently to the local footballers.

“But they have their culture, they are like this, you know? If I listen to what the people say, I wouldn’t be here or play football.

“If I listen what one or another says, it’s very tough. I have to play football, which is what I always wanted, but I have suffered a lot for being a footballer.”

Amazingly candid stuff from Suarez there. It’s true that his name sells papers, it’s an easy pop for most editors, but the other side of the coin is that there is barely a game goes by without him pulling some nefarious or -at best – debatable stunt. Most week’s Luis Suarez is newsworthy for one reason or another, usually by his own creation.

Just stop the rolling around, the incessant gamesmanship, the pleading and the pantomime screaming and we can be friends.