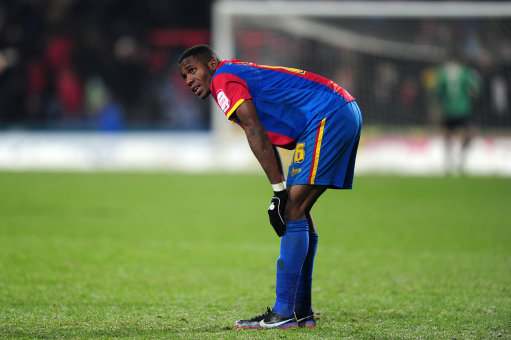 Knowing me, knowing you, ZAHA!

It’s been in the offing for weeks now but today Manchester United have confirmed that they have struck a deal with Crystal Palace for much-vaunted winger Wilfried Zaha, with £15 million changing hands when the player arrives at Old Trafford in the summer.

Zaha, who is due at Carrington for a medical this morning, has signed a five-and-a-half-year deal with United – who will pay £10 million up front and £5 million in add-ons – and will leave for pastures new after playing out the last five or so months of the Championship season with Palace.

This from United’s official site:

United, Palace and Wilfried Zaha have reached an agreement for the player to join Manchester United in July 2013. The player is having a medical in Manchester today (Friday 25th January).

There will be no further comment by any party until Wilfried joins United in July 2013, although Sir Alex did speak briefly about the deal at his Friday morning press-conference.

“As we like to do, we sign young players with potential,” the manager said. “We can also develop players well here. That’s proved to be the case many times.

“Hopefully the boy will enjoy it coming here when he eventually does join us in the summer.”

From what we’ve seen since the news broke this morning, Zaha’s signature seems to have split United fans somewhat, with some welcoming the addition of an exciting player dripping with potential and others bemoaning wasting £15 million on another winger – indeed, many are questioning why Fergie didn’t use half the money to bring in Wesley Sneijder and blow the rest on his exorbitant wages.

Do you United need another winger? No, so we’re guessing this means Nani’s off in July.

From what we’ve seen of Zaha – which admittedly isn’t a lot, though we have seen him play live a couple of times –  United are getting a semblance of a top notch winger with an impressive repertoire of ball skills without quite having the nous to complete the package.

We’d estimate that United have paid about £10 million too much in terms of ‘as is’ value but potential, especially English potential, carries a high premium these days – and the potential’s definitely there, it just needs to be nurtured properly. He’s only 20 after all.

Any thoughts folks? How are the United fans greeting the news?