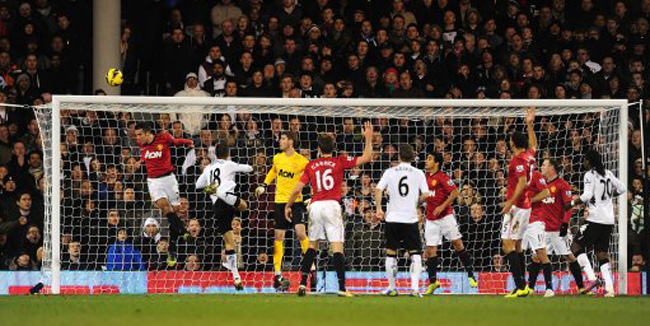 A late Wayne Rooney goal was enough to secure a hard-fought victory for Man Utd at Craven Cottage, a result that sees the Red Devils go 10 points clear at the top of the table.

In an open game, both sides had chances, with Bryan Ruiz hitting the woodwork and Ashkan Dejagah, amongst others, also going close. The visitors also came close on a number of occasions, with Mark Schwarzer keeping out Javier Hernandez and Patrice Evra hitting the bar.

The game was brought to a halt just before half-time when the lights went out, but after the break, the league leaders finally broke the deadlock when, on 79 minutes, Rooney fired home a fine effort to win the game for United.

There was still time for Philippe Senderos to almost equalise, only to see his goal-bound effort cleared off the line by his former Arsenal team-mate Robin Van Persie. But in the end, the Whites couldn’t get that vital equaliser.

So United go 10 points clear, having played a game more than Man City. Fulham, on the other hand, drop to 13th.