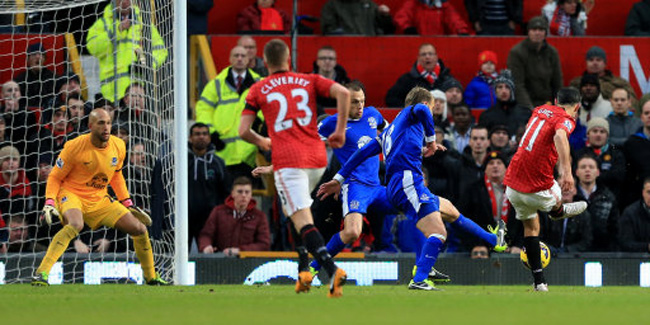 With Real Madrid boss Jose Mourinho watching on from the stands, Manchester United moved a step closer to regaining the Premier League trophy after a decent win against Everton.

Robin Van Persie had already missed an open goal before the Dutchman set up Ryan Giggs for his first goal of the season, meaning the Welshman has now scored in 23 consecutive campaigns as well as becoming the third oldest scorer in Premier Leaugue history.

RVP then doubled his side’s advantage on the stroke of half-time to all but put the game to bed.

Everton, who were without Sylvain Distin, who had become unwell in the warm-up, struggled to match their hosts although sub Nikica Jelavic did go close late on. However, Tim Howard was by far the more busy of the two ‘keepers as Fergie’s men coasted to another win. Now 12 points clear of second-placed Man City, surely the title is theirs?

The Toffees, on the other hand, are now sixth, two points behind Arsenal.