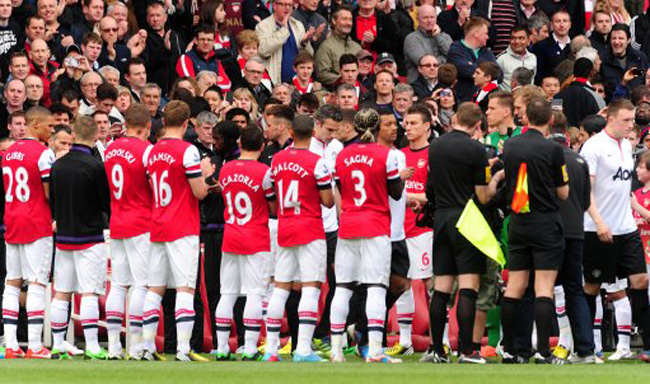 Robin Van Persie’s much discussed return to his old Emirates stomping ground saw the Dutchman net from the penalty spot to help his side to a 1-1 draw.

The Gunners gave the newly elected Champions the customary guard of honour while RVP got a fair amount of abuse from the Arsenal faithful as expected.

Theo Walcott gave the Gunners the perfect start, firing past David De Gea in just the second minute, although the England man was about a foot offside when he received Tomas Rosicky’s through-ball.

That goal also came after RVP had lost the ball, but the striker made amends for his error just before half-time, converting a spot-kick after Bacary Sagna had given the ball away to the Dutch star before fouling him in the box.

The Gunners were the better side for large periods of the game but struggled to find a cutting edge, with Lukas Podolski, playing centrally in the absence of the suspended Olivier Giroud, rather disappointing.

The Red Devils did improve after the break, but ultimately a draw was a fair result, which leaves the Gunners well in fourth spot in the table.