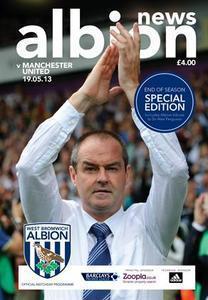 What with it being Sir Alex Ferguson’s 1,500th and final game in charge of Manchester United, the atmosphere was always going to be a bit wappy at The Hawthorns on Sunday afternoon and, as one cursory glance at the scoreline will duly attest, things got a bit hectic.

Perhaps in the spirit of the game, one fan saw fit to buy 700 copies of West Brom’s special 144-page match programme (which includes a 40-page tribute to Fergie) at £4 a pop, meaning he blew the princely sum of £2,800 in one fell swoop.

Earlier in the afternoon, another solitary fan snaffled up 300 copies from a vendor outside the ground (at a cost of £1,200), meaning one twentieth of the 20,000 editions that were printed for the game ended up in the hands of just two fans.

It should come as no surprise that a flurry of the programmes have now found their way on to Ebay, with asking prices set around the £25 mark.

The best bit? Well, if the two fans who monopolised the market are hoping to make their millions and retire to the Caribbean on the profits of their evil empire, we’ve got a bit of bad news: West Brom have since confirmed that a whole load more of the limited edition programmes are to be printed soon so fans won’t have to pay through the nose to get their hands on one.